The word Oahu literally translates to “The Gathering Place” and what brings people together more than food?? It’s no surprise that Hawaii has an incredibly unique food scene. Read on for some of my favorite local restaurants on Oahu… 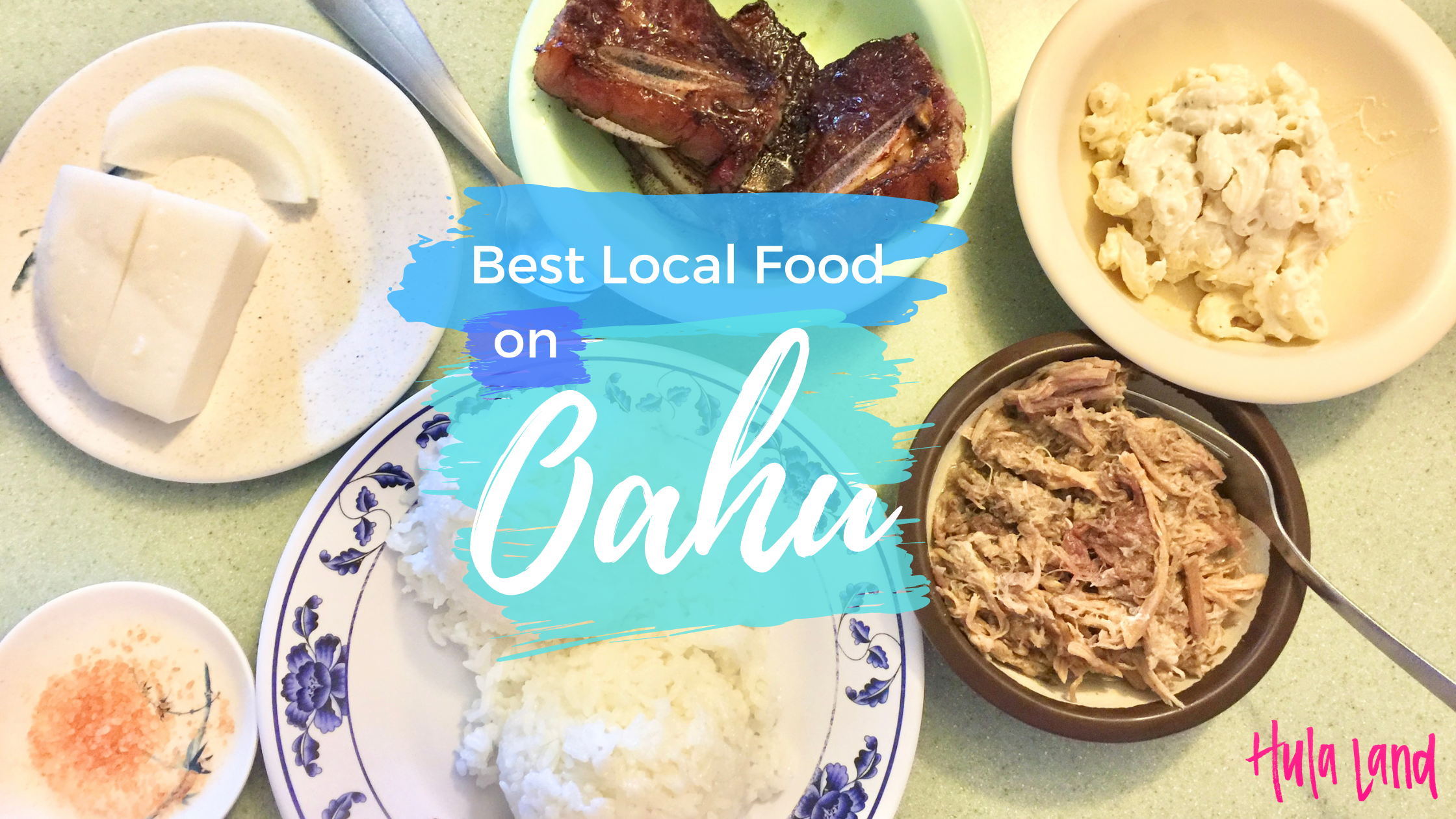 Hawaii’s local flavors, dishes, and food styles are a window to the island’s history. Considered to be some of the world’s finest agricultural land, it wasn’t long after the arrival of the first missionaries in Hawaii that the first sugar cane plantations sprouted up. Pressed for labor, enterprising businessmen began luring immigrant workers from Japan, China, the Philippines, Brazil, and other countries. These ethnicities mixed with local Hawaiians and created the cultural melting pot that Hawaii is now famous for.

While each of these cultures has their own distinct cuisines (most of which are well represented on Oahu), “local style” Hawaiian food is a completely unique blend.

So you have an idea of what to expect on your trip to Oahu, I’ll give you the rundown on a handful of specific foods that are considered “Hawaiian” that you can add to your “must try” list and then give you a roundup of some of the best restaurants on Oahu for local food.

Musubi: Spam musubi is a snack that’s always in-demand. Often eaten for lunch because of its convenience, it is put together by sandwiching a slice of grilled Spam between two blocks of rice, or putting a slice of Spam on top of a single block and then wrapping it with a piece of nori (like seaweed). Pretty much any general store or gas station will have really good musubi. And it’s not unusual to find variations with other kinds of meat if you just can’t do spam ; )

Loco moco: The traditional way it’s served is white rice, topped with a hamburger patty, a fried egg, and brown gravy. This is a dish that Hawaii is super famous for and it’s becoming more and more popular to find “trendy” or unique variations on it.

Poke: In recent years, a poke craze seems to have swept across the mainland, but be assured that Hawaii did poke before it was “cool” (i.e. something you could find in Williamsburg, Brooklyn ; ) Made with mainly diced raw fish, again, the variations on poke are endless. You’ll find it at high end restaurants, the grocery store, and local dives.

Poi: Poi is a traditional staple in the Hawaiian diet (going back to ancient Hawaiian times). It’s an acquired taste to say the least. It’s purple-that’s one thing it has going for it, and on it’s own it’s pretty bland. It’s made by smashing taro (a root vegetable) into a paste-like substance. It’s common to try poi at a luau and some touristy restaurants will even have it available to try (usually as more of a novelty).

Malasadas: It’s a Portuguese style donut and you simply must have one. Heavenly doughy little pillows, they’re usually covered in some kind of sugar and sometimes have fillings. You just can’t go wrong anyway you get them.

Manapua: Similar to a Chinese steamed bao bun, these are popular snack and lunch items like musubi. Fillings can vary and they’re commonly found at convenience stores.

Saimin: A noodle soup that often has toppings like sliced Spam, hard boiled egg, shredded nori (seaweed), and sometimes even Chinese dumplings. It’s a little different everywhere you have it.

Shave Ice: You’re likely familiar with this one. In Hawaii, shave ice is commonly served with a scoop of ice cream on the bottom and condensed milk on top.

Okay, now that you’re caught up on some foods to look out for, here’s a round up some of the best Oahu restaurants for local food:

Helena’s Hawaiian Food: It’s not fancy (the best places aren’t though, are they?), but this iconic fixture on Oahu has been serving dishes passed down through generations. They do a lot of take out, but definitely plan to stop by if you have the time because the kind service and welcoming ambiance really makes the experience. It’s a local spot to be sure, but they see a fair number of tourists and are very welcoming, taking time to walk you through the menu and explain a good way to order. If you’re only going to hit one “local” restaurant on your trip, make this it.

Highway Inn: Bring a big group to make a dent at the menu here. With three locations- Kaka’ako, Waipahu, and Bishop Museum Cafe- and different menus at each joint, you can’t go wrong with their tasting platter. The pork laulau is highly recommended, so don’t skip that one. They’ve also got 20 varieties of poke!

Rainbow Drive-In: Equally a local and tourist favorite, this family owned spot has been around since 1961. If you’re only going to try a loco moco at one place, this probably should be it. Add a side of seasoned chili fries if you like the heat. Portions are huge, prices are friendly, and things tend to sell out quickly so get there early. There’s also not a ton of parking so if you’re staying in Waikiki, you might consider walking.

The Alley at Aiea Bowl: Local Hawaiian food…in a bowling alley? Yep. Take a trip to the 80s with a visit to the award-winning Alley at Aiea Bowl. Do a little bowling, enjoy some top-notch food, and …have a ball ; ) It’s an extensive menu with everything from pizza to noodles to plate lunch specials. Are you an adventurous foodie? This place was featured on Diners Drive-Ins and Dives for their oxtail soup. And save room for dessert because their strawberry and lemon crunch cakes are drool-worthy. Their chocolate layer cakes are also a hit!

Waiahole Poi Factory: This roadside hole in the wall spot (outdoor seating) is one of the best places on the island to try Hawaiian style comfort food. Plates of kalua pig, squid or beef lu’au and sides of laulau, rice, lomi salmon, and poi are as Hawaiian as it gets. Don’t fill up on lunch though…you’ve got to save room for dessert! Get the Sweet Lady of Waiahole. It’s warm kulolo (a taro sort of pudding with a thick consistency served with haupia (coconut) ice cream.

Musubi Café: Need a quick bite? Musubis are made fresh daily in a variety of options, some even vegetarian friendly, but the onigiri and tuna curry is a fan fave. Head down to the beach nearby for a nice view and a tan to accompany your snacks.

Side Street Inn: Sidestreet is a family-style inn with a seriously local vibe that serves classic dishes like tender Korean short ribs and their signature garlic fried chicken. Mouth watering good dishes served in huge portions and a casual setting means this spot fills up fast. Make reservations in advance!

Koko Head Café: Head to Koko Head Cafe for a classic American diner style brunch with a Hawaiian twist. With loads of fancy variations on the island classics to sink your teeth into, and a counter where you can watch all the magic happen, the cafe makes for a great place to soak in the island’s culinary creativity. Give the cornflake French toast, gooey ohayou eggs, and flavorful dumplings a try. Really, anything on the menu is great.

Marukame Udon: This Waikiki hot spot regularly finds itself at the tippy top of visiting foodies “must try” lists. This low-key Japanese restaurant  serves up some of the favorite udon on the island and nothing is cooler than watching them make the noodles from scratch right in front of you.. Their nikutama udon is especially popular but also don’t miss the shrimp tempura, calamari and fish cakes.

Mitsu-Ken: This Japanese fast-food eatery is famous for their lunch bentos. The garlic chicken is the talk of the town. Go early because crowd favorites (like the chow fun) tend to sell out by mid day.

Palace Saimin: Palace Saimin is a hidden gem when it comes to BBQ in Oahu. Besides their noteworthy BBQ sticks. they specialize in…you guessed it…saimin. Their home-made noodle soup is pretty mouth-watering. The proof is the clientele. This isn’t a spot frequented by tourists. This small 75 year old eatery is regularly packed with locals who are very welcoming to visitors to the neighborhood.

Ethel’s Grill: Ethel’s Grill is a little mom and pop restaurant that is famous for its home style eats. This cash only place serves dishes like sweet and sour spare ribs, mochiko chicken and Saimin. Their taco rice is also a don’t miss. Celebrity chef Anthony Bourdain has visited and left an autograph on a wall inside so be sure to check that out while you’re waiting for your food. There’s usually a rush at peak hours so try and get there early. Lunch comes with a salad, house dressing and soup so it’s a pretty good bang for your buck!

Ted’s Bakery: Ted’s has been a mainstay on the northshore since 1988, when it first started serving malasadas. Today it offers a wide variety of pies, cakes, sweets and plate lunches. Their chocolate haupia cream pie is what they’re most famous for (you can find it other places around the island now), and on the savory end the tender and smoky Hawaiian chicken sandwich is a crowd favorite.

Leonard’s Bakery: If you’ve done any research about foodie must dos on Oahu, you’ve heard mention of Leonard’s. Famous for their malasadas, a Portuguese fried donut, Leonard’s has been attracting the crowds since the 1950s. Since they come in all different flavors, you’re not going to want to try just one. Load up that famous pink box with an assortment. It’s not uncommon to find a line around the block at Leonard’s, but it usually moves quickly. They also have four “MalasadaMobile” trucks around the island! Check their website for locations.

Liliha Bakery: This place doesn’t get as much hype among tourists as Ted’s and Leonard’s but don’t make the mistake of skipping it! Open for breakfast, lunch, and dinner, Liliha Bakery is a foodie’s paradise serving up both sweet and savories. With three (soon to be four!) locations around Honolulu, it should be easy to squeeze in a stop. Famous for their Coco Puffs (chocolate cream puffs slathered in Liliha’s famous Chantilly frosting), they also do a mean loco moco, and smoked pork belly with eggs.

Romy’s Kahuku Prawns Shrimp Hut: Oahu is famous for its shrimp trucks, and while this isn’t the most famous, it’s pretty darn good. Get there early to avoid the line (and also because certain menu items can sell out early-when it’s gone it’s gone!). Cash only.

Ono Seafood: Looking for the best poke on the island? It just might be Ono Seafood. This takeaway-only restaurant serves ahi poke with flavored sauces and a side of rice. The portions are large, and the fish and octopus are caught fresh and marinated pretty much perfectly everyday. Get the poke bowl combo to try two different kinds.

Fresh Catch: Fresh Catch is an island style seafood and meat deli that is simply perfect for all your poke cravings. Huge portions of fresh fish are served with flavorful dipping sauces. Other popular options are the ahi katsu, beef stew, sashimi platters, and the pasteles. If you happen to be there on a Wednesday try their special crab stuffed ahi roll – it’s a favorite!