The stretch of Route 66 from Tulsa to Oklahoma City is arguably one of the best in the country. It’s almost 100 miles of uninterrupted road through small towns and countryside leaving you with the feeling of how it might have been to travel across country along Route 66 many moons ago. 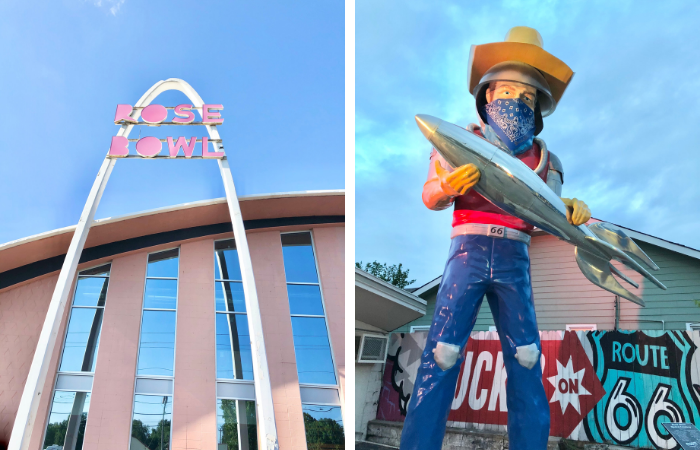 While so many sections of the old Route 66 are just small fragments here and there or merely highway access roads (if not completely paved over), it’s nice to get a taste for a longer drive.

Read this post for a full rundown of all the Route 66 stops in Tulsa.

As you’re going west towards Sapulpa on I-44, there’s a clear exit for US-66 and it’s a very well marked road all the way to Edmond (a suburb north of Oklahoma City). 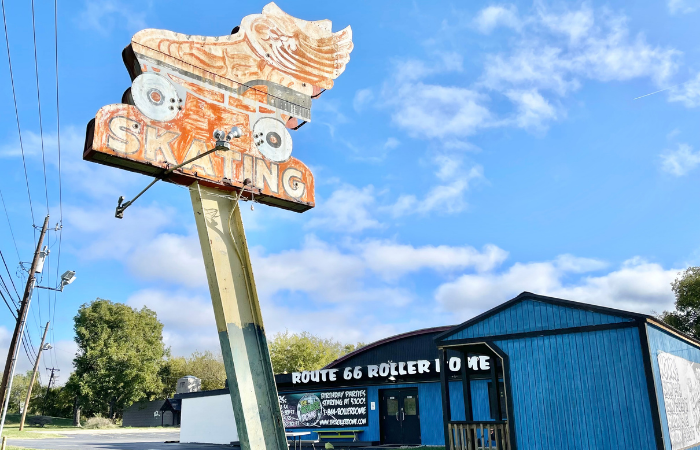 I would have loved to see this neon sign back in its day. It’s only a shell now, but this place seems fun (I can’t skate to save my life so I haven’t been) and definitely harkens back to the kind of fun that today you’ll only find in small, rural towns.

I don’t have a particular stop for you here, but the small town of Bristow is definitely worth a stop. Poke around in a few shops on Mainstreet or just admire the concept of a mainstreet in general that only exists in small town America. 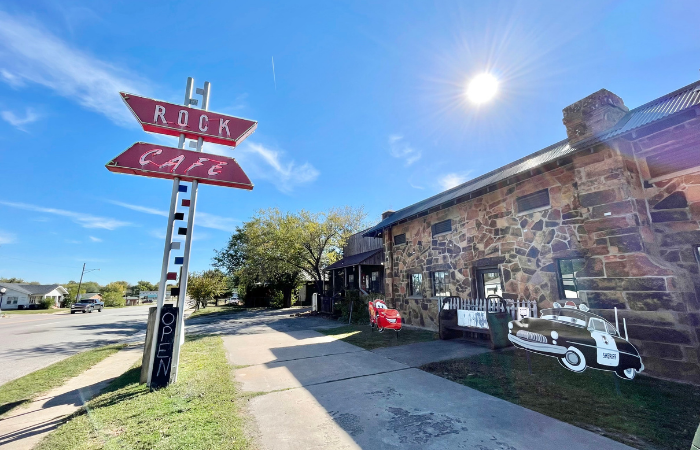 Having a meal at this roadside cafe is at the top of my Route 66 Oklahoma bucket list (I always seem to pass through when it’s closed). It has a long history, but it’s current proprietor (Dawn Welch) is notable for being the inspiration behind the “Sally Carrera” character from the Pixar movie Cars. You know…the little blue Porsche who wasn’t from Radiator Springs, but loved the town and the road and the people so much that she relocated and dedicated her life to trying to revive it? There are some fun Cars cutouts out front to take a picture with and a great neon sign. A must go…just don’t go on Sunday or Monday ; ) 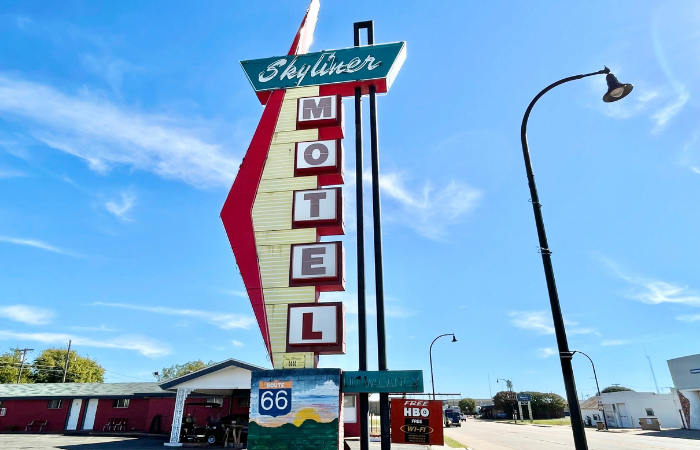 I can’t say much as to whether or not it’s a great place to stay (I would say probably meh?), but their neon sign sure is cool! 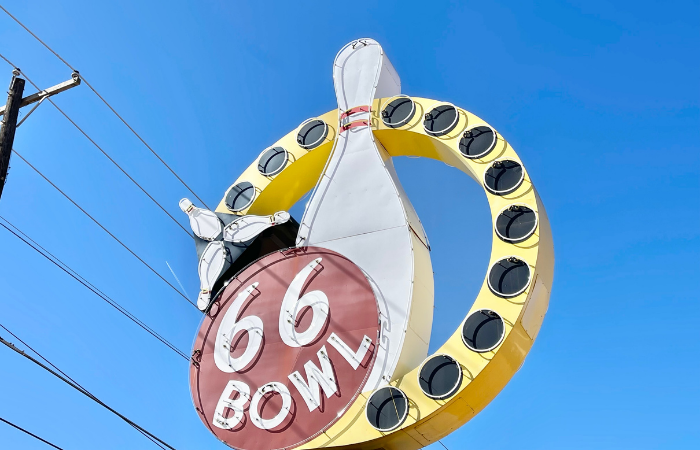 Gosh, this place looks fun! I was drawn in by their neon sign, but want to go back for bowling and some dive food soon. It’s definitely a place that celebrates the Route 66 heritage.

Another roadside motel that I’m not quite sure about staying at (???), but they’ve got a fun neon sign. 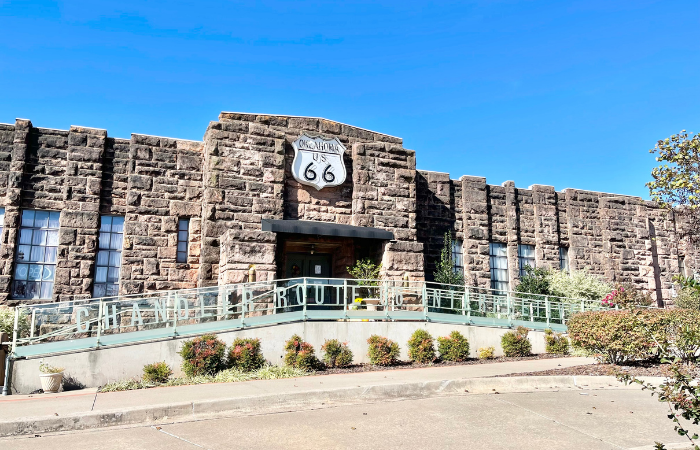 I haven’t stopped in here yet, but it looks nice and well run from the outside.

As a tribal member, I would be remiss if I didn’t tell you about (maybe?) the only casino on historic Route 66 ; ) 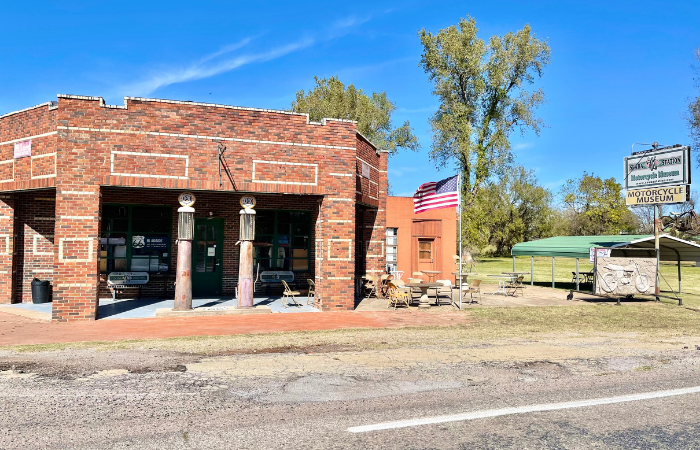 This former filling station turned motorcycle museum is a fun place to check out if you have a few minutes. The original Seaba Station was built in the early 1920s (before Route 66 was an official road!) and houses an impressive collection of vintage motorcycles. 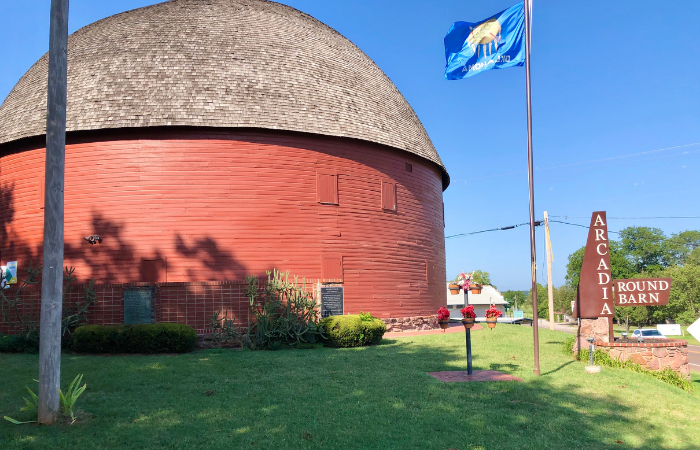 Built by a local farmer way back in 1898, the Round Barn (yes, it’s actually a round barn) is one of the most popular roadside attractions on Oklahoma’s Route 66. The barn is on the National Register of Historic Places (added in 1977) so it’s been fully restored and it’s kept up really well. It’s only 7 days a week (unless it gets too hot in the summer…and yes it was actually closed due to heat when I went last summer) and admission is free. There’s also a small gift shop.

Pops is a primetime example of renewed interest in Route 66 in Oklahoma. Just east of Edmond, this newly built roadside diner features a gas station, and over 100 kinds of bottled soda! You can’t miss the 66-foot tall (heh, get it?) LED soda bottle out front. It’s a perfect modern attraction that pays tribute to the old diners and filling stations. 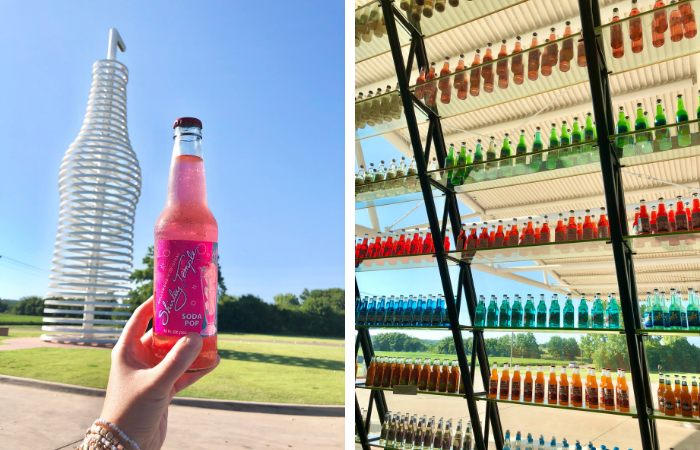 Pops is always hopping so if you go around mealtime (there’s also a convenience store set up where you can buy bottles of pop and other goodies) expect a wait (especially in the summer). Now you just have to decide if you want to try a new soda or go with an old favorite.

I can’t for the life of me figure out Route 66 in Oklahoma City. It’s all over the place. Once you pass Pops and get into Edmond, the road just seems to kind of die out and picks back up on the other side of town (near Bethany), but then there’s also a north/south portion of old Route 66 that goes right through the middle of town too. Anyways, there’s a few sites to see in OKC itself. 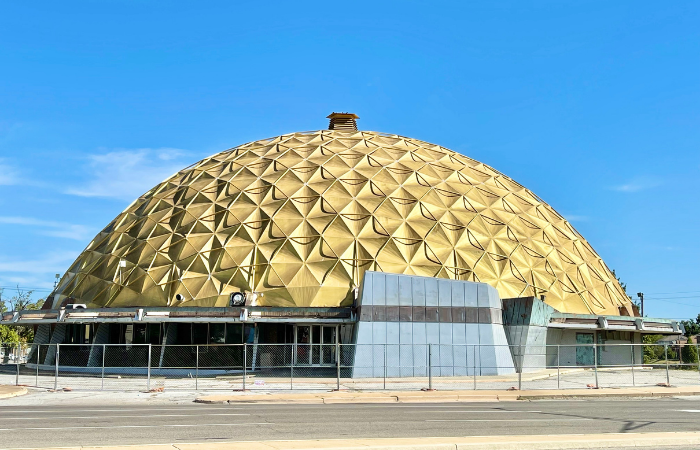 Built in 1958, this geodesic gold dome in the heart of OKC is a great example of mid century architecture. It was originally opened as a bank, but it’s been vacant and in disrepair for quite some time. There are talks of a developer buying it to turn it into some sort of unconventional concert venue. 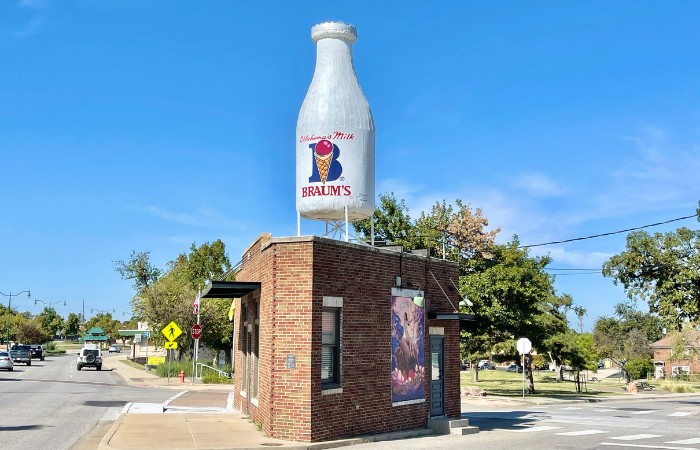 A tiny triangle shaped grocery store with a milk bottle on top. Things you only see in Oklahoma? 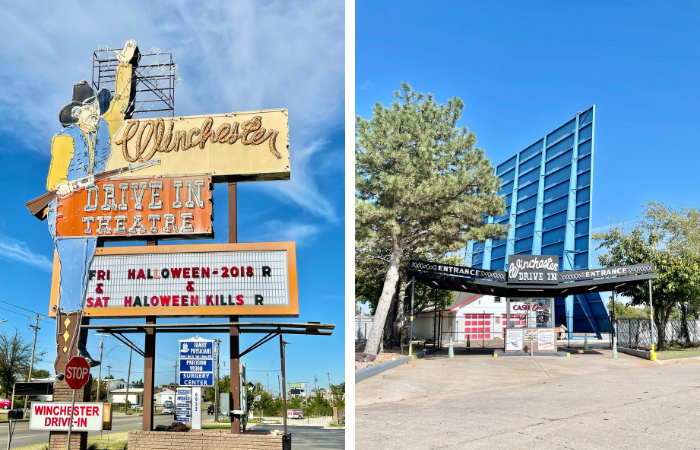 The Winchester is not technically on Route 66, but it’s been around forever and it SEEMS like the kind of place that would’ve been on Route 66. There aren’t too many drive-in movie theaters left in the country, but this one still operates on the weekends and 7 days a week during the summer. It’s on my Route 66 bucket list to visit when the neon sign is lit up because it’s truly legendary.

I spotted the neon sign for this joint last time I was flying down Route 66 in OKC, and I’ll definitely be back to try it. They’ve been open since 1963 so it must be good! 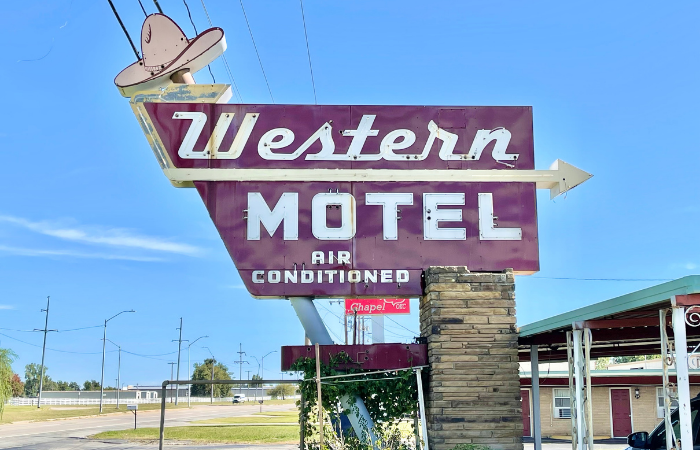 Planning a Route 66 road trip? I’ve got all of the info you need!

Plus I’ve rounded up my absolute favorite experiences (things to do, where to eat, where to stay, etc.) by state here: Illinois, Missouri, Kansas, Oklahoma, Texas, New Mexico.