Everybody comes to Sanibel for the shelling, right? This barrier island that sits positioned just perfectly on Florida’s Gulf Coast to catch whatever treasures storms stir up in the ocean is famous for being the best shelling spot in Florida. On my latest trip to Sanibel, I came armed with a list of places I wanted to go shelling, but after doing some research into the area I found out that the best shelling in the area wasn’t actually on Sanibel, but at nearby Cayo Costa State Park. 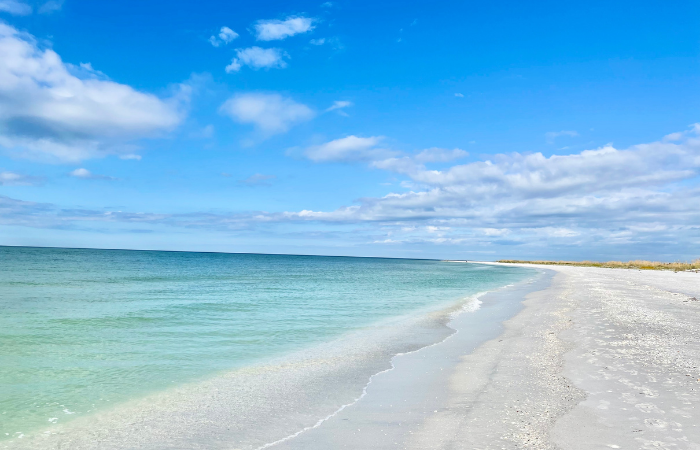 This long, skinny island just north of Captiva (the island north of Sanibel) is a state park with no roads or bridges. Being limited to boat traffic means the shelling is MUCH less picked over than nearby Sanibel and Captiva islands.

Unless you have your own boat, the best way to get to Cayo Costa for shelling is on a shelling tour with Captiva Cruises.

I booked the half day morning trip (9AM-12PM) to Southern Cayo Costa. It’s normally operated on a motorized catamaran that makes the trip from Captiva to Cayo Costa in about 30 minutes, but the day before our trip I got a call that the boat had been taken in for repairs and we would be sailing on a sailing catamaran (which also had a motor) so our trip was extended a bit until 12:30PM or so since it would take longer to get there and back.

Our cruise departed from the marina at the South Seas Island Resort Marina at the north end of Captiva. We were advised to arrive at the resort around 8:30 which was good advice because it’s a good little drive from the guard shack at the resort entrance back to the marina.  When the cruises leave from the resort marina, you’ll need to pay $5 cash at the guard shack for parking (when they leave from their other location, they collect your parking fee online when you checkout). 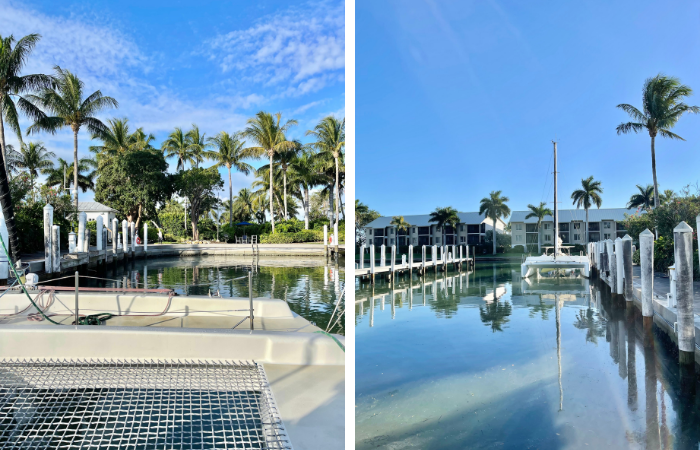 Pro Tip: There’s a Starbucks right across the street from the South Seas Island Resort if you want to grab coffee and a light breakfast before your cruise. When we were there most restaurants in the area weren’t opening until 8AM and I didn’t want to be rushed trying to grab breakfast in Sanibel early and make it to Captiva on time.

The parking area was easy to find and there was a crew member there to direct us to the marina and they also had a golf cart if you needed a ride (but it was a pretty close walk).

We got to the marina about 10 minutes early and were treated to a pretty good show by some local manatees so the time flew by. 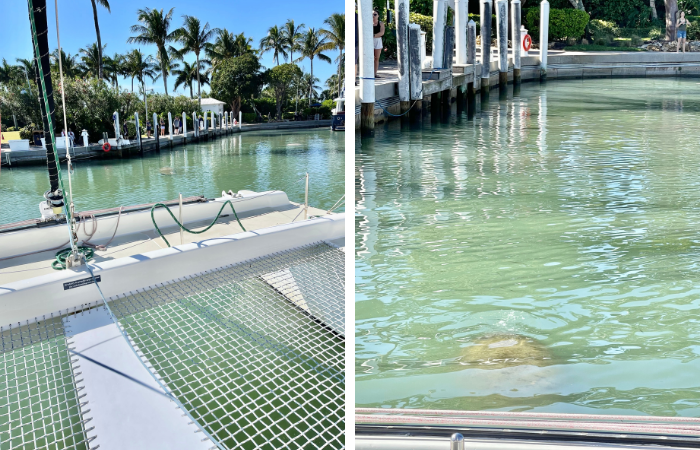 We boarded right on time and were off pretty quickly. There were probably 12-15 people on our boat and plenty of room to spread out.

It took almost a full hour to motor to Cayo Costa (there wasn’t a good wind for sailing) and it was CHILLY. It was probably 65 degrees at 9AM (beginning of December) but overcast and with the wind it was pretty cool. We had come prepared with sweatshirts and beach blankets and it was still pretty brisk so pack accordingly.

Our captain and first mate gave us a great tour of the surrounding area and let us know what to expect once we got to the island.

Since it’s a smaller catamaran (or boat), they’re actually able to dock at Cayo Costa which is nice instead of landing at the beach and wading in. From the tiny dock, it was a short walk down a boardwalk to the beach. 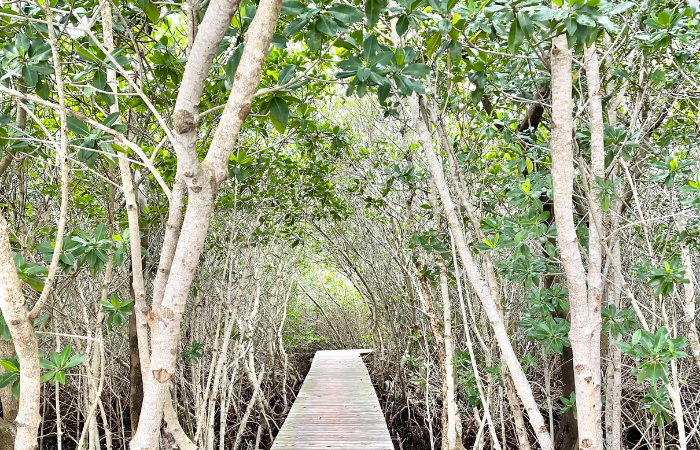 There are NO facilities at this part of Cayo Costa so you need to bring everything you want with you (but there is a restroom on the boat). Also, they mentioned that they had water and soda available for purchase on the boat, but you’re welcome to bring your own as well.

Once we got to Cayo Costa we had just under two hours until we needed to be back on the boat. Some people in our group had chairs and they set up camp near where we arrived, but most people walked the beach looking for shells. Just keep an eye on the clock because however far down the beach you go, you’ll have to come back. The boat doesn’t move locations on this shelling trip to pick you up somewhere else down the beach. 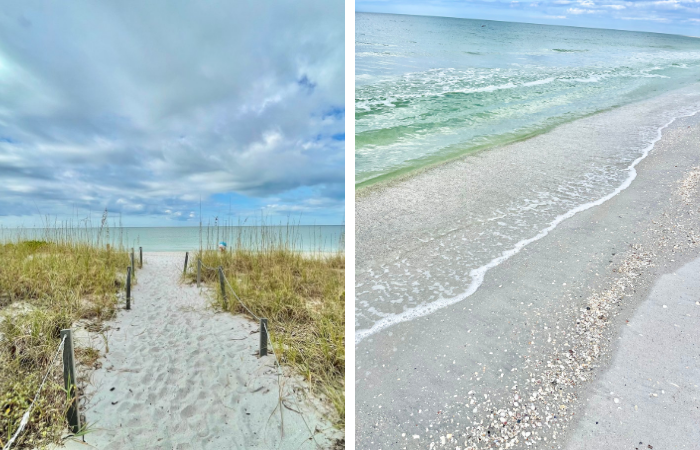 The crew gave us some tips about which direction to head depending on what we were looking for and I decided to head to the right since it was more common to find sand dollars down that way.

I was really impressed with the shelling! Ever since I did this shelling cruise with Treasure Seekers out of Marco Island to the Ten Thousand Islands (the best shelling in Florida by a landslide), I’ve had pretty low expectations of other shelling spots. Well, this spot wasn’t better, but it was better than I thought it was going to be. 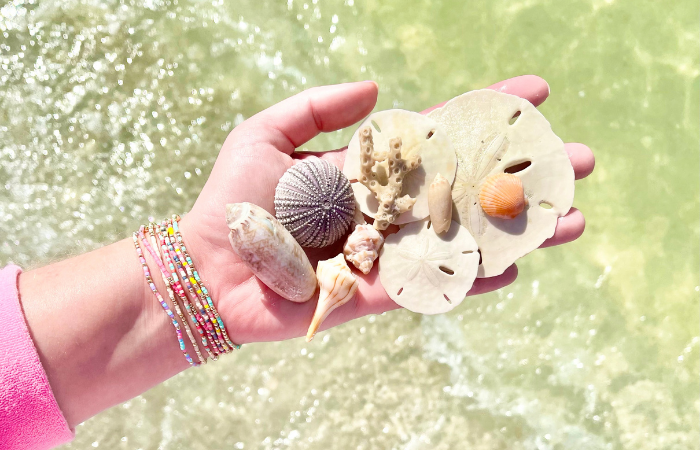 I picked up almost a dozen sand dollars (and I was kind of at the back of the pack of people on our boat who headed the direction where the sand dollars are most often found) and found quite a few lightning whelks, olives, and even some urchins.

I found a lot of sand dollars right on the beach, but our captain mentioned they were mostly found around a little point in shallow water. Well it being December, I wasn’t really prepared to go wading around in cold water, but I’ll do pretty much anything to find sand dollars so in I went! I was wearing shorts and strap-on sandals so that helped, but if I went again I would’ve worn some kind of athletic quick drying shorts instead of denim. What actually would’ve helped was having one of those scooper/strainers to grab them up with instead of having to reach down (that’s when I usually got wet). I found quite a few sand dollars in knee to mid thigh deep water and probably would’ve found way more if I had stayed out longer but I caught a pretty big wave and called it quits ; ) If the weather is warm though and you’re wearing a swimsuit, you should be able to find tons. 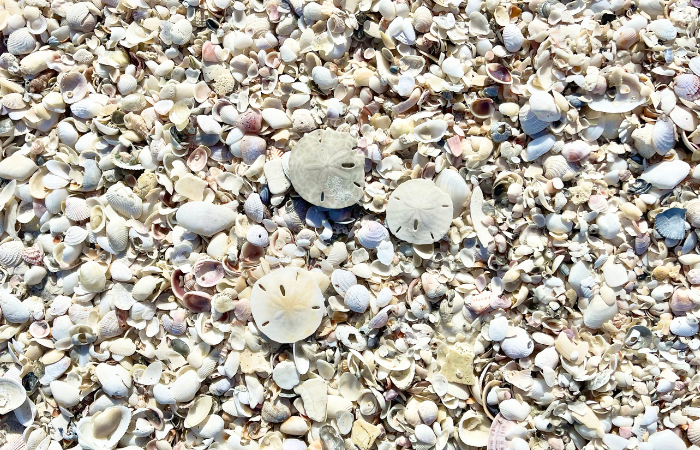 Sanibel Restaurant Recommendations: What I Liked & What I Didn’t

A Visit to the Bailey-Matthews National Shell Museum

What Gear to Bring

Backpack or Hip pack to keep your hands free

Water shoes/sandals that strap onto your feet. The beach was very soft and sandy the day I went, but often at good shelling beaches you don’t want to be barefoot 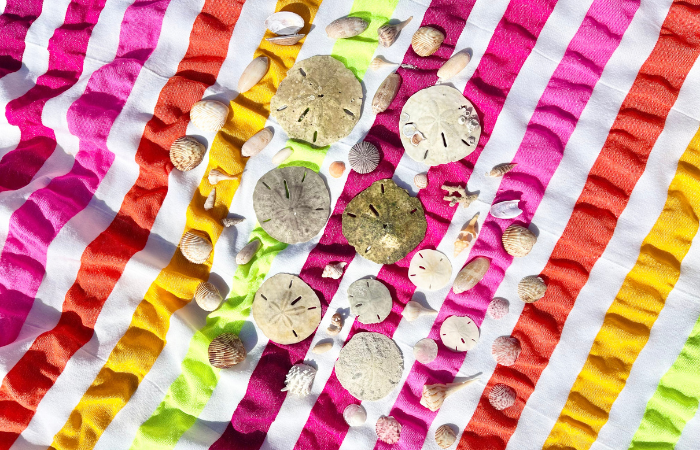 I think this cruise is a BARGAIN and 100% worth the time and money. At $45/adult for 3-3.5 hours, that’s a pretty good value. And I was very happy with the amount and kind of shells I found. You can book it here.

Now, I would NOT want to be on the afternoon shelling trip. There were 20 or so people lined up waiting to get on the boat when we got back to the dock and well, you know what they say about shelling…the early bird gets the worm.

I would definitely do this cruise again or try the full day cruise to Northern Cayo Costa where you get four hours of shelling time (you’d definitely want to pack a cooler for that one). And next time I’m in the area, I’m planning to do another cruise with Captiva Cruises to either Useppa Island or Cabbage Key. 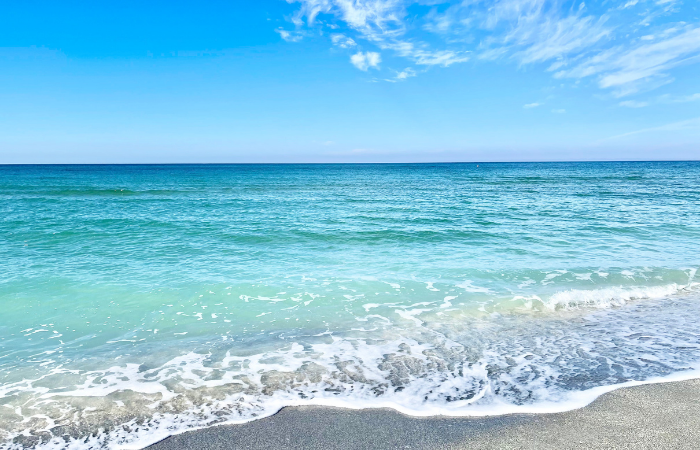 More posts about this area: