Taos is a town for eating! Northern New Mexico has one of the more interesting regional cuisines in the country and for a town it’s size, Taos has a pretty high number of stand out restaurants.

I visit Taos quite a bit, so I get asked pretty often for restaurant recommendations (and I’m always looking for new spots myself), so I’m keeping a log here of places I’ve been, what I’ve thought, and places to go next.

This post is a compilation of eating at a lot of places in Taos, plus asking around for personal recs, pouring through local publications to see who’s winning reader’s choice awards, and cross checking options on TripAdvisor and Yelp.

I’ve broken things down by different categories so you can find exactly what you’re looking for.

Orlando’s: If you’ve only got time for one meal in Taos, make it this one. It’s on the outskirts of town, but don’t make the mistake of thinking that means it’ll be less crowded than places downtown. EVERYBODY loves Orlando’s. They’re open for lunch, then they close for a couple of hours before they open back up for dinner and there’s almost always a line of people waiting. It’s not a terribly big restaurant, but they have a pretty big patio so if it’s raining or chilly, seating is really limited. 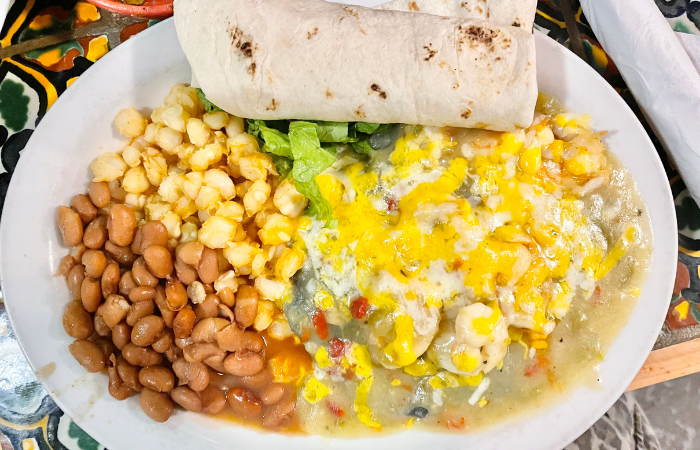 In my opinion, Orlando’s does the Northern New Mexican style cuisine better than anybody else in Taos.

My go to is always the blue corn shrimp enchiladas with Christmas chilis (red and green). 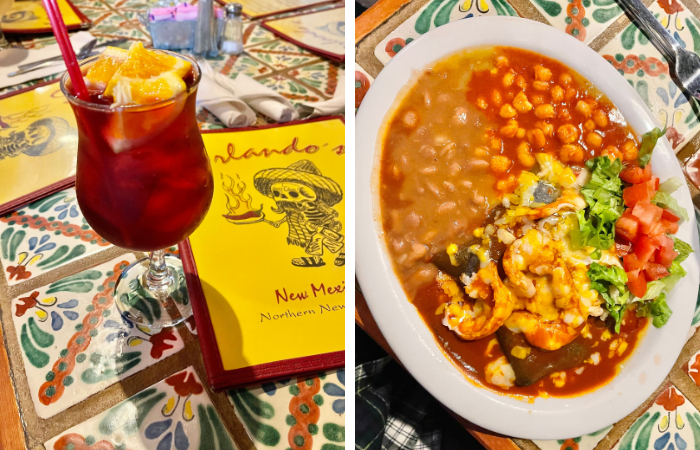 The margs are just ok here, definitely not a stand out. And like most places in the area, you’ll pay extra for chips and salsa (a surprise if you’re used to tex mex style places in Texas and Oklahoma).

La Cueva Cafe: If you want Northern New Mexican style food closer to downtown Taos, head to La Cueva Cafe. They have really limited indoor seating, but the patio is really nice. The enchiladas NM were good, but my favorite was the enchiladas de camaron enchipotladas (shrimp enchiladas with a chipotle cream sauce). 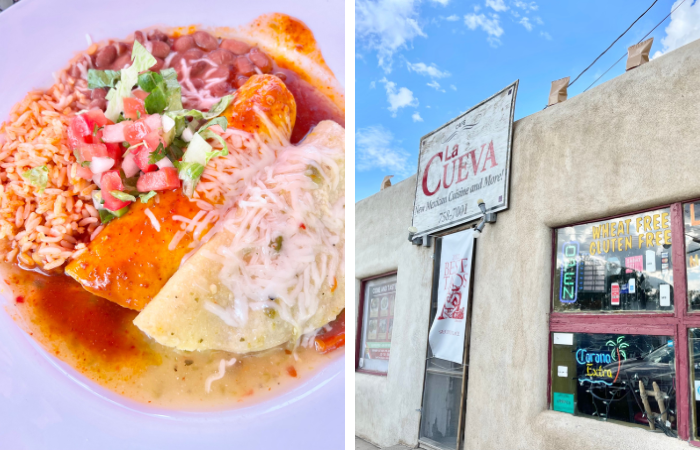 Ranchos Plaza Grill: Besides La Cueva, this is one of the most highly rated NM style restaurants in the Taos area on TripAdvisor. It’s always been closed when I’ve been in the area so I haven’t had a chance to try it yet, but it’s located in Ranchos de Taos which is where the San Francisco de Asis Catholic Mission (a noteworthy historic site) and the Chimayo Trading Del Norte (great place to buy turquoise jewelry and Native American art) so it’s a nice little side trip from Taos.

Abe’s Cantina y Cocina: A popular spot in Arroyo Seco (on the way to and from the Taos Ski Valley) that’s most known for their drinks but if you can catch them when they’re serving food people are always pleased with it for the price.

Antonio’s: Antonio’s came highly recommended by many people as the best place for Mexican food in Taos, but we didn’t realize until after we were there that it’s traditional Mexican style (not New Mexican or Tex Mex) so it wasn’t exactly what we were expecting. Also I think we caught them at a bad time (they’re struggling to find enough people to work just like everyone else). What I learned here is that I’m not familiar enough with traditional Mexican food to know what’s best to order. The blue corn buffalo enchiladas weren’t my favorite, but I was comparing them to Orlando’s and I don’t think it’s an apples to apples comparison. Anyways, a lot of the flavor profiles in some of their specialty dishes weren’t what we were used to (umm, pomegranate seeds for starters) so I just felt a little out of my element. Need to do more research on what’s best to order and try again. Just don’t go in expecting a similar cuisine as Orlando’s or other Northern New Mexico spots.

On the more casual end of the spectrum (not that any of the above places are particularly fancy), here are some more options:

Mante’s Chow Cart: More of a fast food option (but still very local), they have a drive through or you can eat inside. I went with the daily special (some sort of chicken burrito) and it was good, but the lady who helped said they’re well known for their tamales so maybe try that. A good lowkey, casual option for local style food.

A few more places that have been recommended: 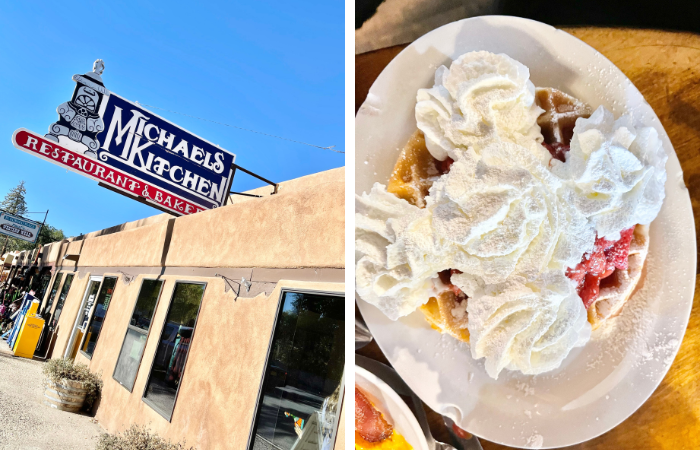 Michael’s has been in Taos FOREVER and my family’s been coming here since I was quite little so it’s a sentimental favorite. They do traditional breakfast options plus New Mexican favorites. Some of their specialties like waffles, blintzes, etc are only offered until 11 or so even though they serve breakfast until they close. 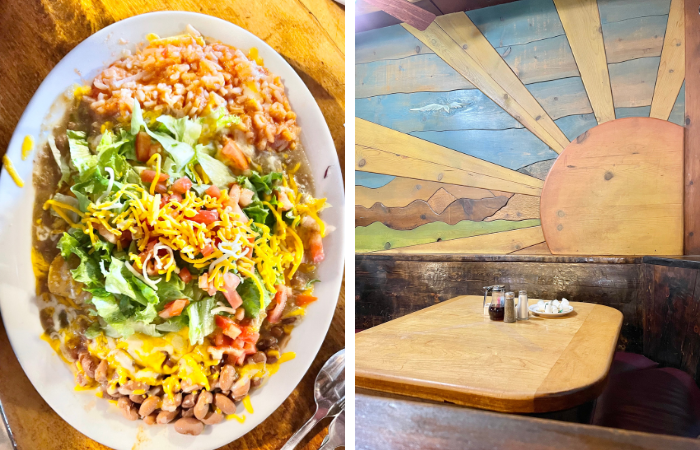 If you’re in a hurry or the line is too long, step inside an order something from their amazing bakery case.

Farmhouse Cafe & Bakery: This place is tippy top of the list to try next time I’m in Taos. It’s just outside of town towards El Prado in the most lovely setting. The views of the mountains from here are lovely and there are quite a few shops in the little complex.

Gutiz: This Latin-French fusion restaurant is rated as one of the best breakfast places in Taos on TripAdvisor so naturally I’m intrigued. The menu looks super interesting!

For Coffee or Something Sweet…

Coffee Apothecary: Probably the best all around coffee shop in Taos. Great pastries and snacks too!

World Cup Cafe: Conveniently located right at the main intersection of downtown Taos. Great for a shopping pick me up.

Koko: A great local chocolate shop where they do the whole process from bean to bar.

Chokola: The place to go if you’re gluten free, dairy free, etc. Good coffee, hot chocolate, etc but as someone who does eat gluten and dairy I prefer the sweets other places. I’ll go back to try their mousse though!! 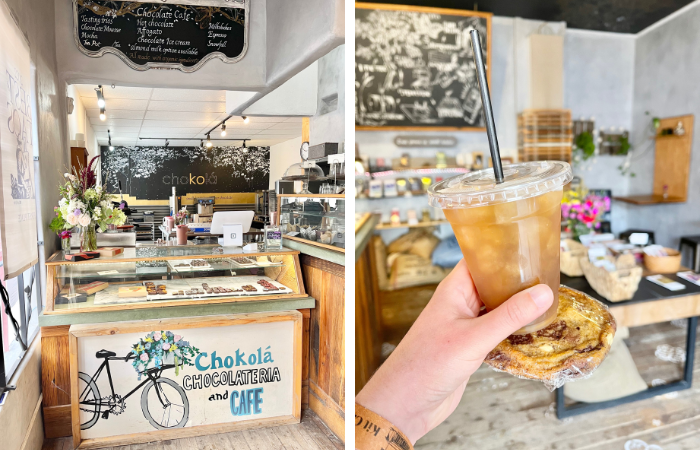 A Salty Little Sweet Shop: This is in the same area as La Cueva Cafe if you need a little something sweet after. 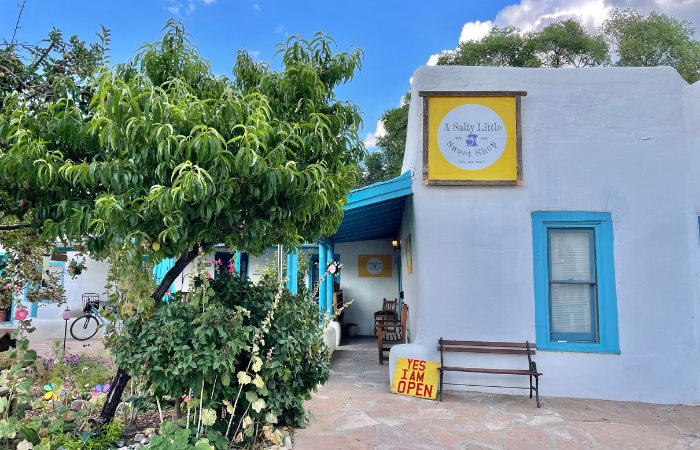 For a Nice Dinner…

Taos has some pretty high quality higher end restaurants. I’m usually always just looking for something quicker or a little more lowkey, but I’ve been doing some research to broaden my horizons ; ) Here’s a list of places I’ve rounded up that are perfect for a nice(r) night out and some general impressions of each one…

I’ll start with options in downtown Taos and work my way out from there.

Lambert’s of Taos: Open since 1989, Lambert’s has been on the Taos culinary scene for a long time focusing on fresh food with locally sourced ingredients.

Martyrs: Open for lunch and dinner, the heated patio looks pretty cozy. Right in the middle of downtown, they specialize in steaks.

Aceq: Located in Arroyo Seco on the way up to the Taos Ski Valley, Aceq describes themselves as “elevated mountain dining.”

Sabroso: Another spot in Arroyo Seco set in a cozy hacienda.

Some of the best spots in Taos for a drink…

The Lounge by Rolling Still

For a Casual Lunch or Dinner…

A few more places that I haven’t made it to yet, but have been recommended by family and friends…