If there’s one iconic thing to do in Hawaii, it’s got to be going to a luau right? Would you believe I’ve only ever been to one luau before and it was back before my blogging days so I figured my latest trip to Kauai was high time for another one! 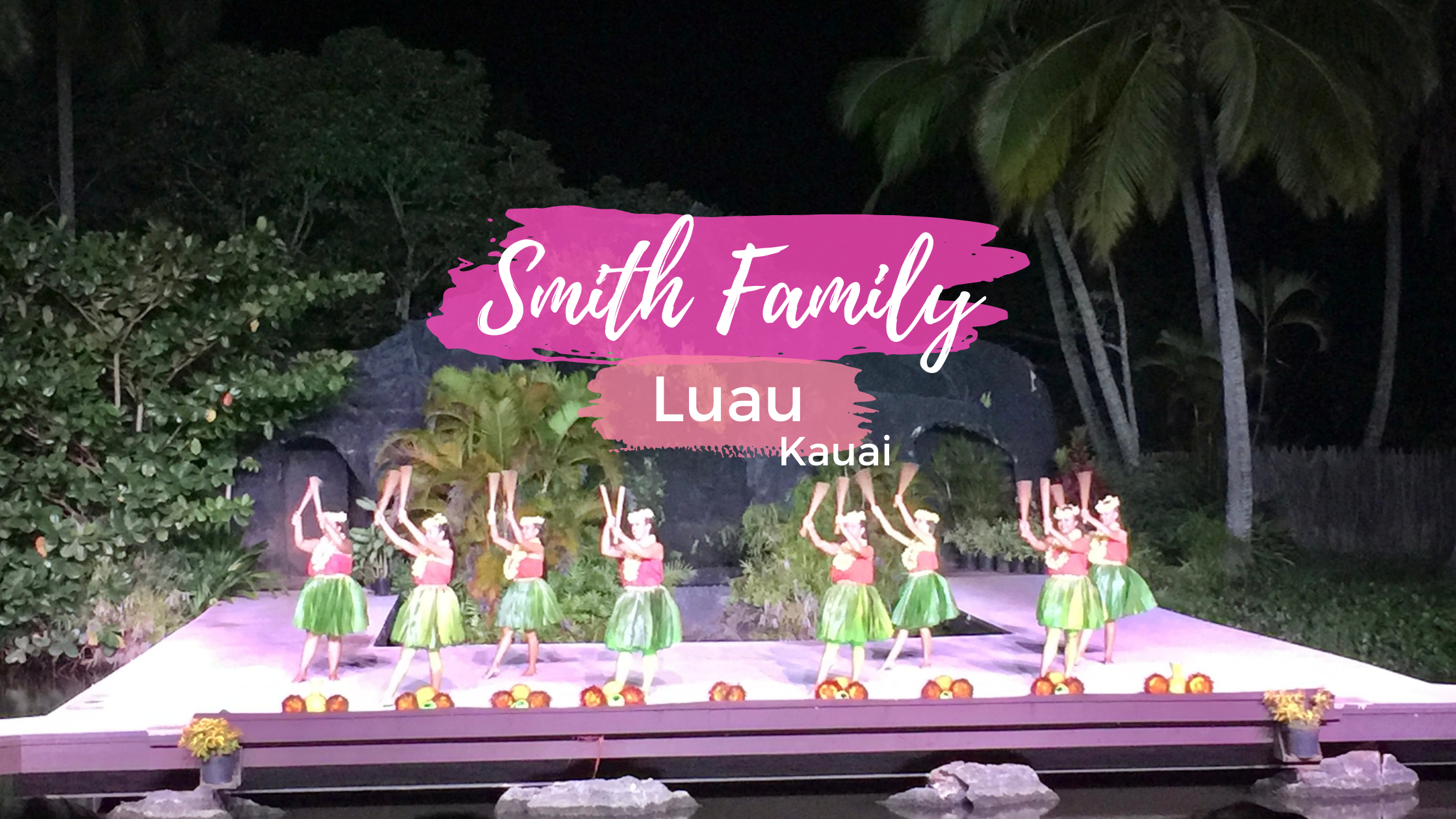 After doing some research, I decided to attend the Smith Family Luau because it was highly recommended as the best luau in Kauai and I also liked that it’s a family ran business (the Smith Family has been in business since 1946). Also, the luau’s setting (it’s hosted in a 30+ acre tropical garden) looks EXACTLY like Elvis’ Blue Hawaii (it was actually filmed right up the road at the Coco Palms Resort) and I’m not going to lie, that was a major selling point! 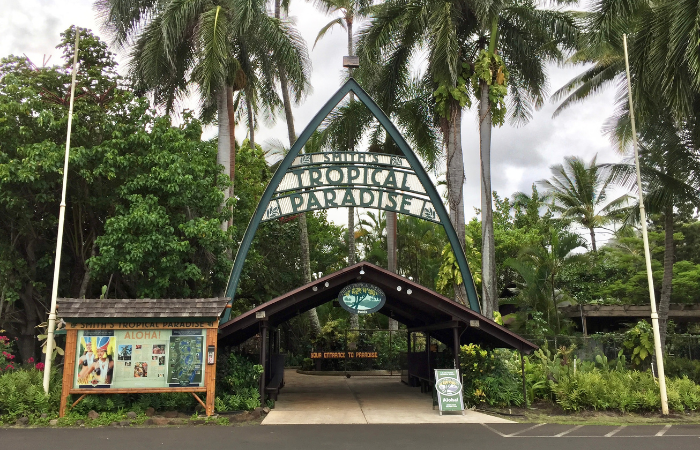 Before I get into the details of how the evening progressed, I’ll just tell you that the Smith Family Luau is completely charming. While it’s a modern operation, the setting and atmosphere will have you reminiscing of Hawaii in the 1960s. It feels very vintage, so wear your best aloha attire and get ready to step back in time.

Check the schedule during your trip, but in October the luau was running on Mondays, Wednesdays, and Fridays. I bought tickets online in advance and we decided to add on a cruise up the Wailua River to see the fern grotto before the luau. Since the Smith Family also runs the river cruises and the marina is right next door to the luau grounds, they recommend taking the last trip of the day because it’s timed to end right before the gardens open for the luau. The last river cruise of the day was scheduled for 3:30 PM so we arrived a little early to park the car and buy our tickets. We parked in the luau parking lot and walked over to the marina so we wouldn’t have to move our car afterwards (it’s right next door). 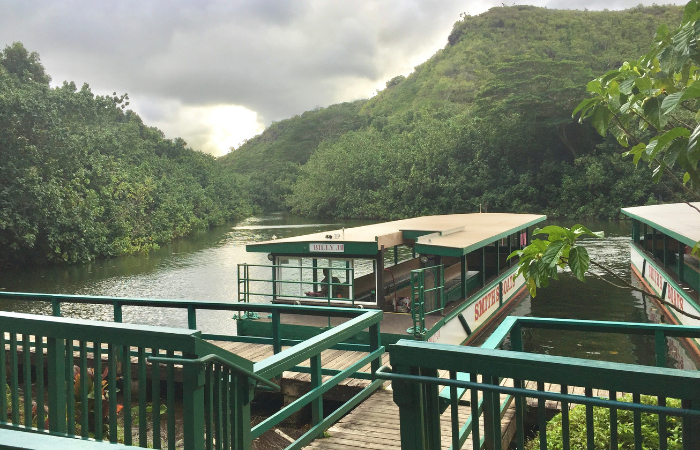 RELATED: Not very familiar with Kauai? Read up on the lay of the is(land) and where to stay plus my favorite condos, luxury resorts, and boutique hotels.

We boarded our boat right at 3:30 (the whole tour lasts about an hour and twenty minutes). It’s a flat barge type of boat with a roof (seems like they’re always prepared for rain in Kauai!). Pretty much everybody on our boat (maybe 50 people?) looked like they were dressed for the luau and this really is a nice pre-luau activity. There was a band and a couple of hula dancers on the boat and they entertained us (yes, they sang an Elvis song or two) as we cruised up the river. 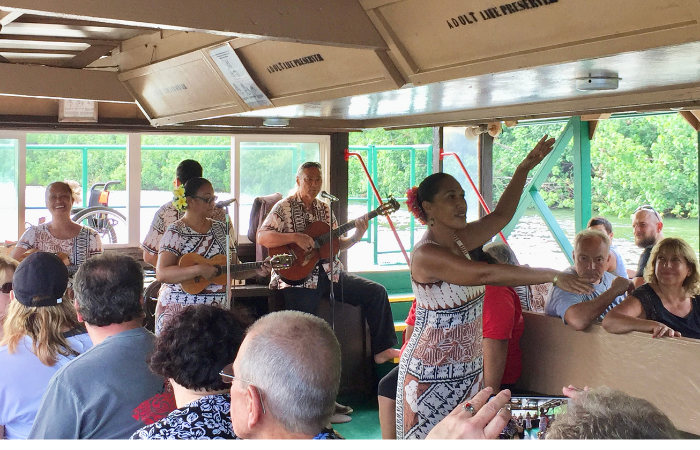 We docked at the fern grotto and walked up the small trail to the viewing platform. The fern grotto used to be a major attraction on Kauai, but sadly Hurricane Iniki in 1992 did a lot of damage to it and it’s not as impressive as it used to be. It’s still a pretty site and they do a LOT of weddings here. Once everybody had oooed and awwwed and taken their pictures, the band played the “Hawaiian Wedding Song” from Blue Hawaii and we got back on the boat for the trip back. 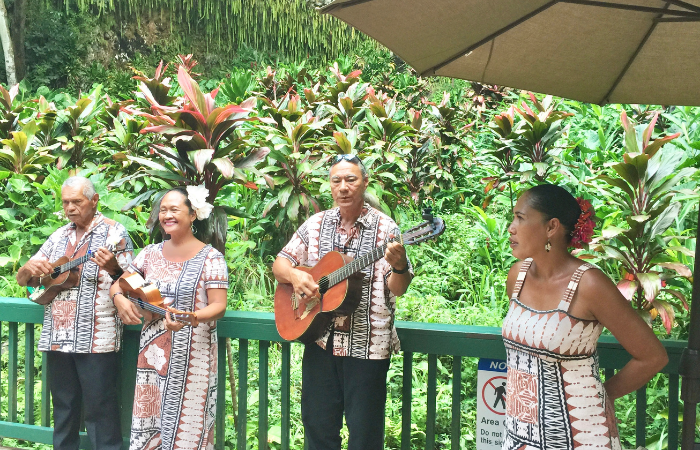 During the return trip, our captain gave us the lowdown on the river, Kauai, the ancient Hawaiian culture, the local flora and fauna, and a run down on some of the movies filmed on the island. 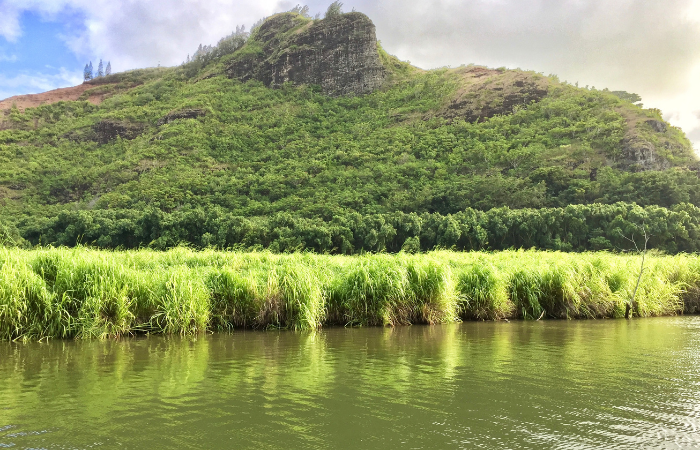 We were back at the marina at 4:50 just in time to walk over to the luau grounds when it opened at 5:00. We checked in, got our picture taken with the obligatory girl in the coconut bra and man in a grass skirt (sadly I didn’t purchase a copy of it!) and boarded a tram for a tour of the 30 acre garden. 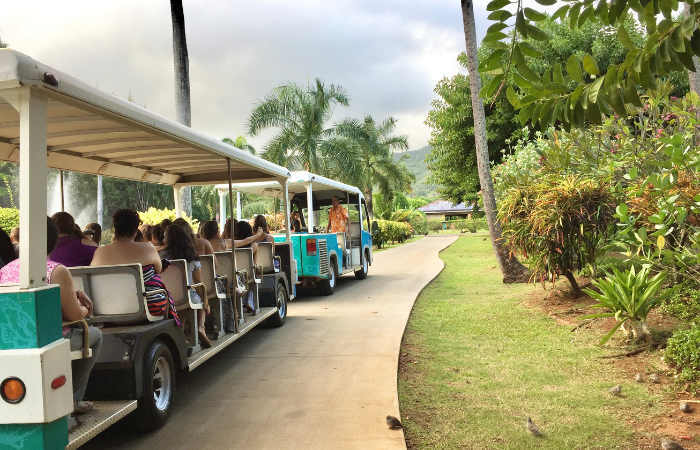 This place is huge! It’s so well landscaped and it’s just downright luscious. The tram tour also helped us get the lay of the land. The meal takes place in a covered pavilion and the theater for the show is nearby. We walked around and snapped some pictures while we were waiting for the Imu Ceremony. 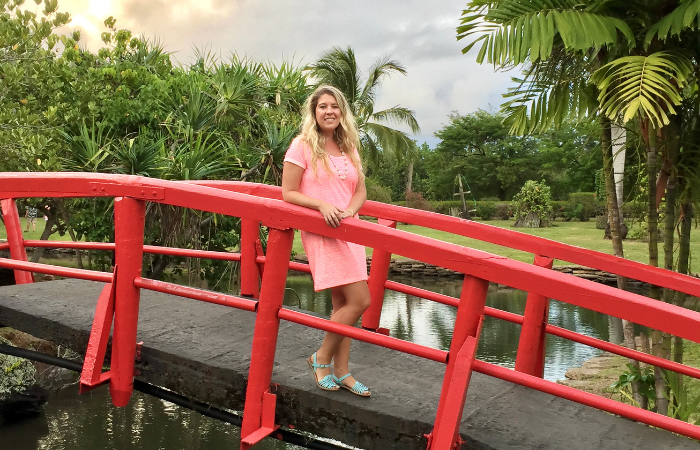 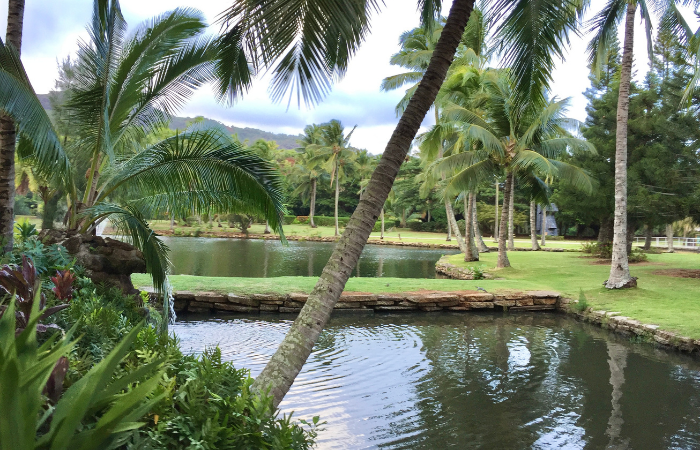 The Imu Ceremony is the unearthing of the pig. There were a few benches around the pit but they were filled up way before the ceremony started. We watched from across a waterway on the lawn of the dining pavilion. 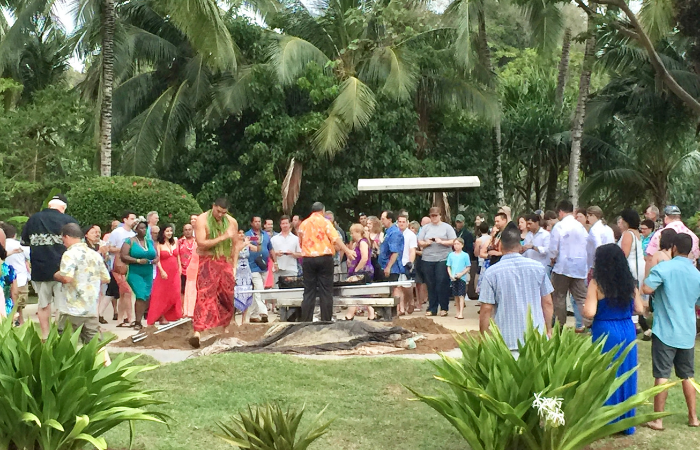 After the Imu Ceremony, cocktails were served and we found our seat. Tables were reserved for large parties but everyone else had to fend for themselves. There were mai tais, and Hawaiian punch pre made as well as an open bar (all you can drink!). We found some seats and a band played while each table waited to be called up to the buffet line.

The meal is all you can eat and boy was I starving! I filled up my plate with salad with guava dressing, macaroni salad, fried rice, mashed potatoes, stir fried veggies, plantains, guava bread, sweet bread, sweet and sour mahi mahi, teriyaki beef, and of course, kalua pork. 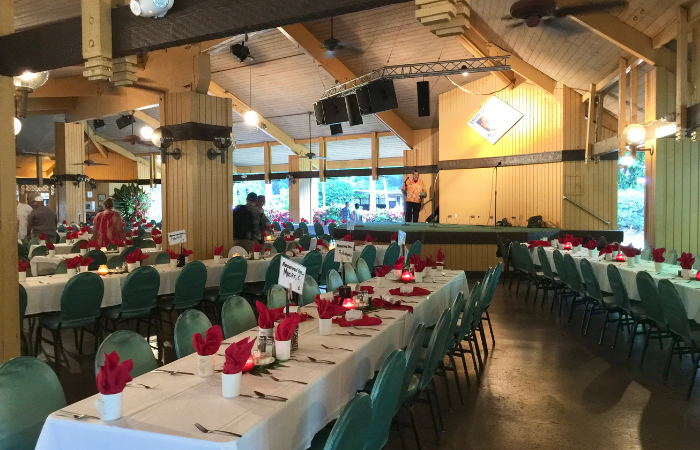 Overall I thought the food was pretty good. I showed up hungry, had my fill, and was pretty satisfied. I think you know going into a luau that you’re going to be getting mass-produced food (there were about 400 in attendance) and I thought it was pretty good. There were so many things there to try that I didn’t even get around to trying everything (yes, there was poi!). I felt like there could’ve been a few more dessert options. They only had coconut cake, rice pudding, haupia squares (like coconut Jello bites), and fresh fruit and while it was all good, I could’ve used a bit more variety (I have a major sweet tooth though!). Also, while the “all you can drink mai tais” are super popular, I’m afraid they’re mostly fruit punch.

After we finished eating, they did a bit of a show where they recognized people celebrating birthdays, anniversaries, and honeymoons and then called volunteers up on stage and taught them a hula dance. It was cheesy and fun and pretty much a mandatory luau experience.

RELATED: 15 Things to Do on Kauai

How to See the Napali Coast

Where to Eat on Kauai

After that bit, we were dismissed to go over to the theater to watch the show. We found seats in the middle of the theater (which I recommend because there are a couple of posts towards the sides that can block the view. The show is a pretty nice production with a decent story line, which begins with an erupting volcano (the birth of Hawaii) and the migration of her people to the islands. There were probably a dozen or so numbers including the traditional hula plus dances from Tahiti, China, Japan, the Philippines, New Zealand, and some other pacific islands and the whole thing was topped off with a fire dance. The show lasted about an hour and it felt just right. 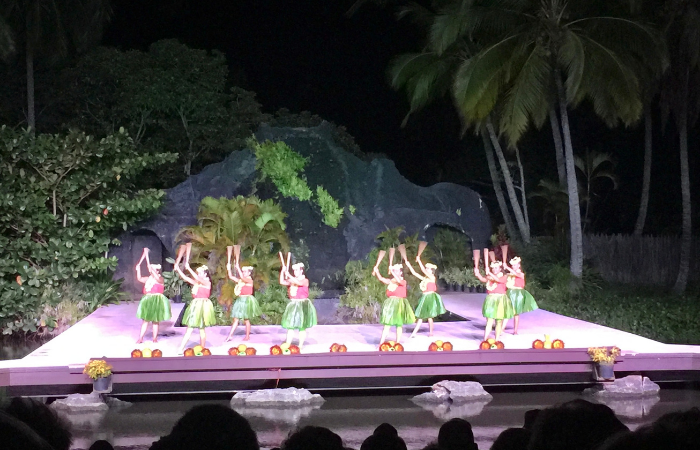 My absolute favorite thing about this show was that this is a family business and it felt very authentic. The majority of luaus in Hawaii feature a couple dozen dancers that all. look. exactly. the. same. While most hula performers in other big productions don’t have an ounce of body fat, these ladies looked like real people. All shapes and sizes were represented and it was easy to see that this is a performance by one family sharing their personal culture with you. There was also a nice age range of dancers (both men and women) and it was so neat to see younger ones out there with their older “cousins” keeping the family tradition alive.

Our entire experience with the Smith Family Luau (including the fern grotto tour) was pretty amazing. Although it was a big crowd, it still felt like a gracious family hosting us for the evening. From the aunties in the kitchen, to the uncles presiding over the ceremony, and the cousins dancing in the show, this truly is a family affair and likely a much different experience than you’ll have at some of the larger luaus on Oahu. If you’re looking for a luau on Kauai, go spend the evening with the Smith Family…you’ll be in good hands! 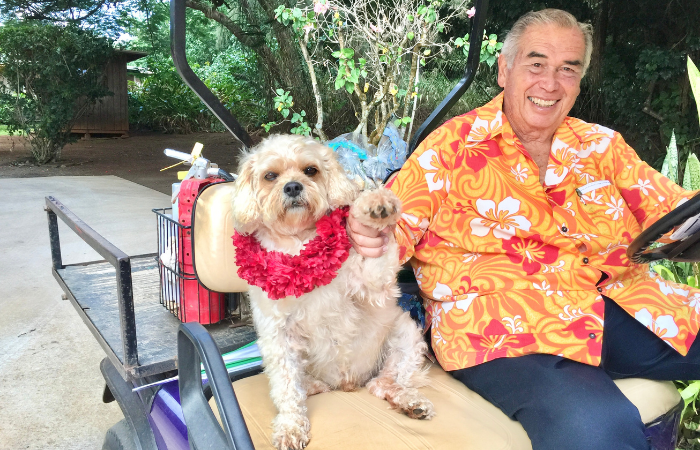 Things to Know Before You Go 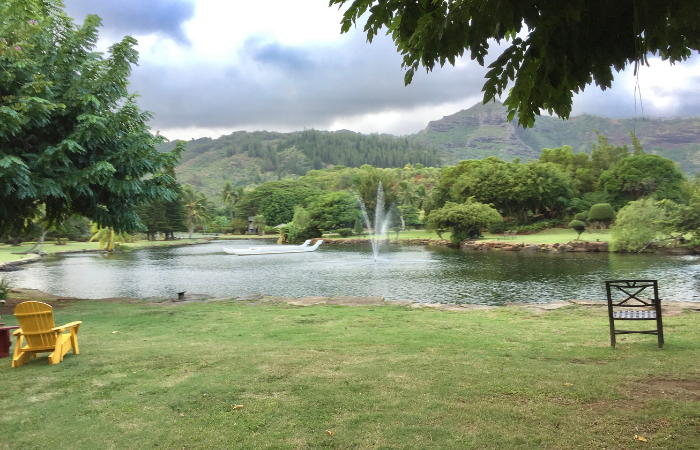