If you’re going to Kauai, you likely know that the #1 thing to do there is see the Napali Coast. If you’re done any research at all, you probably know that it’s not just something you can drive up and see. Kauai’s Napali Coast is so isolated and rugged that it can only be seen by air, from sea, or on foot. You’ll find information about the pros and cons of seeing it each way here, but this post is all about seeing it from the water!

The best time to do a Napali Coast boat tour is during the summer months (April to October). This is when ocean conditions are calmest. Tours are offered (only leaving from the south side) during the winter months, but they’re frequently cancelled due to high surf. 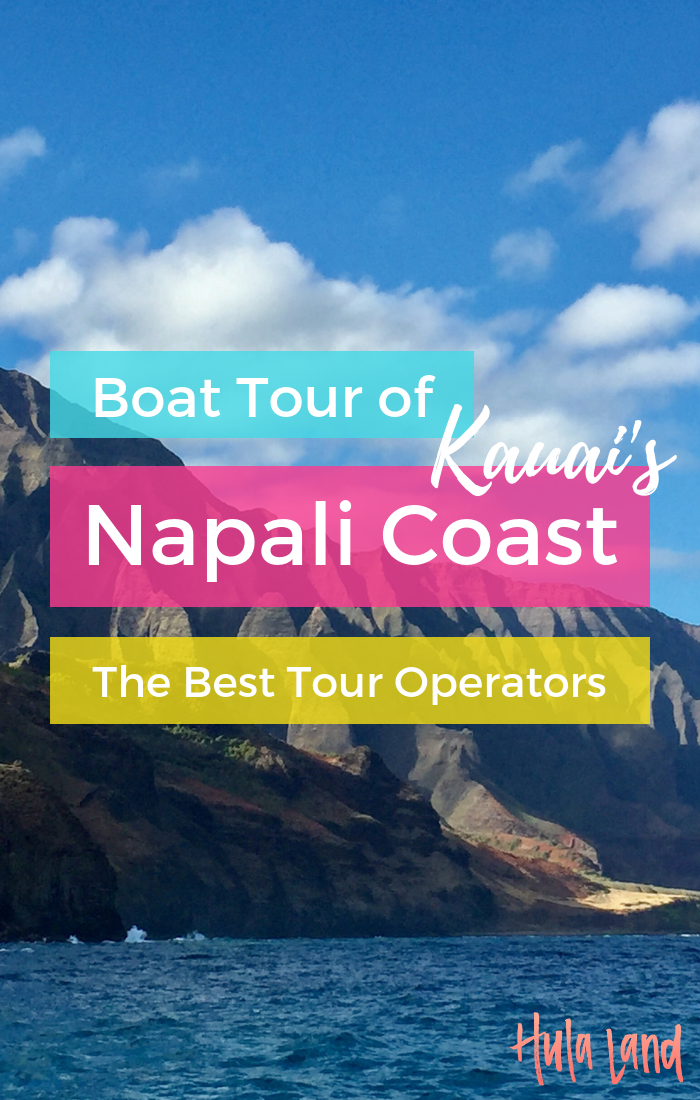 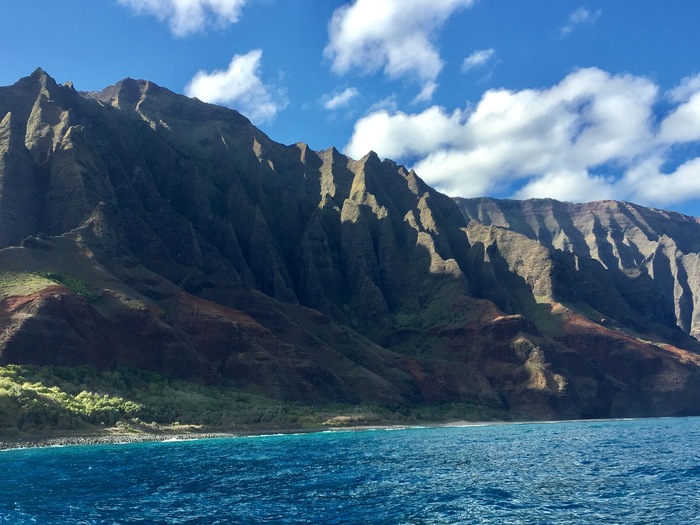 There are a TON of companies that offer boat tours down the Napali Coast, so narrowing it down can be a little tricky. I strongly suggest picking a tour operator that leaves out of Hanalei instead of Port Allen (or anywhere on the south side). When you leave out of Hanalei, your whole tour is up and down the Napali Coast. When you leave out of Port Allen, you have to sail for almost an hour before you even get to the Napali Coast, and to make it back within the four hour allotted tour time, the boats often turn back early and you don’t even get to see the entire coast. Leaving out of Hanalei is only an option during the summer months though due to weather. If your trip is during the winter months, your only choices will be to leave from the south shore.

You’ll also have to narrow down what kind of boat you’ll take on your tour. Boats range from small ocean rafts to large catamarans. When you have an option, always go out on a smaller boat. The big catamarans (although cheaper) can’t venture into the sea caves and that’s one of the best parts of the Napali Coast. Most of the tours on Zodiacs (ocean rafts) are advertised as “snorkel cruises” or “snorkel adventures,” but don’t go in expecting too much. These are definitely boat tours of the Napali Coast to revel in the scenery of one of the most magnificent parts of Hawaii with a (sub par) snorkeling spot thrown in. It’s not terrible, but I’ve done a few different tours that stop at different spots and it has never been anything to write home about. You’re going to see the scenery and enjoy being out on the water.

Like I mentioned before, there are so many tour operators to choose from. If you follow the criteria I’ve outlined above when looking, you’ll end up having a great time. I can’t speak about every single tour, but here are a couple I recommend:

RELATED: Not very familiar with Kauai? Read up on the lay of the is(land) and where to stay plus my favorite condos, luxury resorts, and boutique hotels. 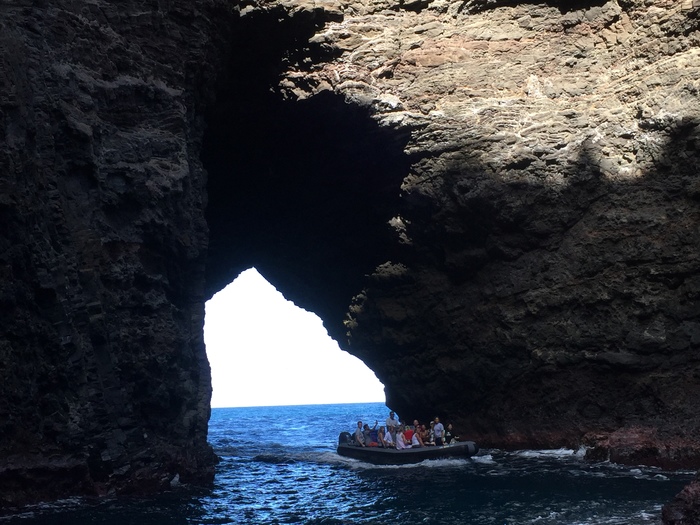 Holo Holo Charters: Last time I was in Kauai, I booked with Holoholo on their Napali Snorkel Adventure out of Hanalei, which is a four-hour tour. Our tour check in was at 7:30 AM behind the Tahiti Nui restaurant in Hanalei (it took us about 45 minutes to get from Kapa’a to Hanalei at this time of day). We checked in, signed our waivers, and loaded up our gear in waterproof bags (they provide them if you don’t have your own).

There were about 24 of us on this excursion, so it took two van rides to transport us down to the loading area near the mouth of the Hanalei River but it was less than a five minute ride so it didn’t take too long. Once we were there, our group loaded on to a small boat and we ferried out to the Zodiac waiting in Hanalei Bay. A Zodiac is kind of an ocean raft/boat so the sides are soft (you can sit on the sides and hold on to a strap) but there are also plenty of seats for everybody.

The neat thing about leaving out of Hanalei (instead of Port Allen on the south side) is that as soon as you clear Hanalei Bay, you’re pretty much on the Napali Coast! As we started down the north shore, our captain pointed out Tunnels and Ke’e Beach and helped us spot the famed Kalalau Trail up above us. This stretch of Kauai is my absolute favorite because it’s so lush and green.

On the journey down the coast, the boat would slow down so we could hear our captain’s stories and have time to take pictures. The views were so stunning that I don’t think the pictures do it justice at all. This wasn’t the first time I’d seen the Napali Coast and I was still blown away by how gorgeous it is!

The benefit of doing this trip on a Zodiac or ocean raft (as opposed to one of the big catamarans) is that you can zip in and out of sea caves! Conditions were good the day we went so we were able to go into several including one with an open ceiling. 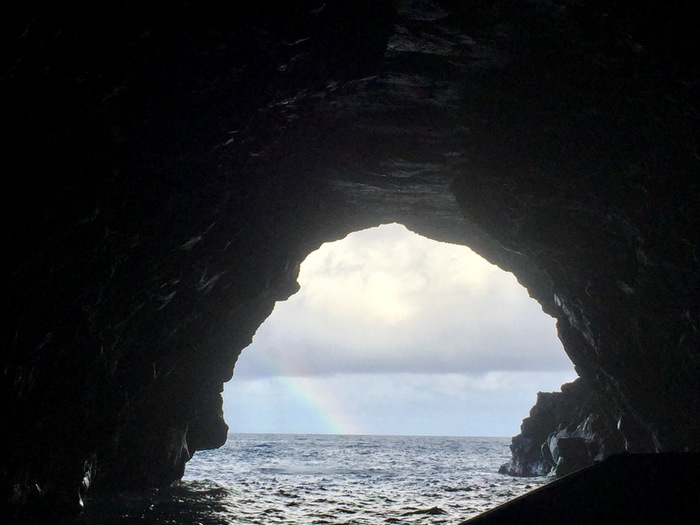 Every single part of this trip is amazing but the highlight is probably seeing Kalalau. You can see it from an overlook at the Waimea Canyon but seeing it from the bottom makes you realize how big it really is. Kalalau beach is a beautiful beach at the end of the 11-mile hike along the Napali Coast. This hike is a two-day minimum but you can hike the first two miles on a day hike.

Our tour down the coast took almost two hours including all of our stops. We went almost all the way down to Polihale Beach before we stopped at our snorkel spot. We had 45 minutes there, which I thought was PLENTY of time. I’ve done quite a bit of snorkeling in Hawaii and the Caribbean and I really wasn’t impressed with this spot at all. I’ve done another Napali boat tour, which stopped at a different spot and I didn’t think it was all that great either. After we finished snorkeling, we had lunch on the boat (premade sandwiches, chips, cookies, and a soda) and then started the trip back to Hanalei. The trip back took about an hour but during the second half it started to rain. I was sooooo glad the rain held off during the trip down the coast, and on the way back we just kind of hunkered down and rode it out. The ride back is also into the wind so it’s much rougher. Not the perfect ending to our trip but we made the most of it and even got to hide out from the rain in a sea cave on the way back. Thankfully the rain had stopped by the time we made it back to Hanalei Bay and started the disembarkation process. We celebrated with mai tais at Tahiti Nui’s!

Captain Andy’s: Captain Andy’s is probably the biggest outfit offering Napali Coast tours on the island. They do everything from small zodiac snorkel tours to sunset catamaran dinner cruises. The only thing I don’t love about this company is that all of their tours depart from around Port Allen (the south side), but it’s pretty convenient if you’re staying in Poipu or going during the winter months when boats aren’t leaving out of Hanalei. 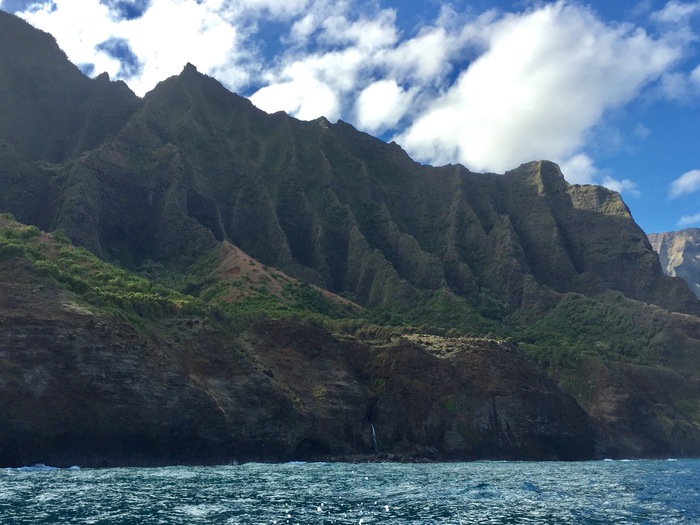 If you’re prone to motion sickness, definitely take it before you get out onto the water! Generally speaking, those who are prone to seasickness might feel it more on a smaller boat than a larger boat.

Most tour companies provide dry bags for you to use. I recommend getting a waterproof case for your phone or camera though so you can keep it out, and bring along a towel or dry clothes for the ride back. It gets pretty windy and it’s nice having a long sleeve shirt to put on.