On my first trip to Miami, I knew I wanted to stay on Miami Beach. That’s where everybody stays right? You don’t come to Miami for the city…you come for the beach (well that’s what I thought at the time but that’s another story for another day). After doing some quick research I was pretty sure I didn’t want to stay in South Beach.

The wild 24/7 party scene is not my deal whatsoever and I kept reading that the “older millennials” and travelers who want something a little more lowkey were starting to leave South Beach for Mid Beach (it sounds like a bigger deal than it is…in reality it’s like…5 blocks). But anyways, Mid Beach it was.

Once I started looking around Mid Beach, I zeroed in on the Miami Beach EDITION pretty quickly. Not only did it have amazing reviews but it’s also part of the Marriott Bonvoy family (hello points!). I’m sold. 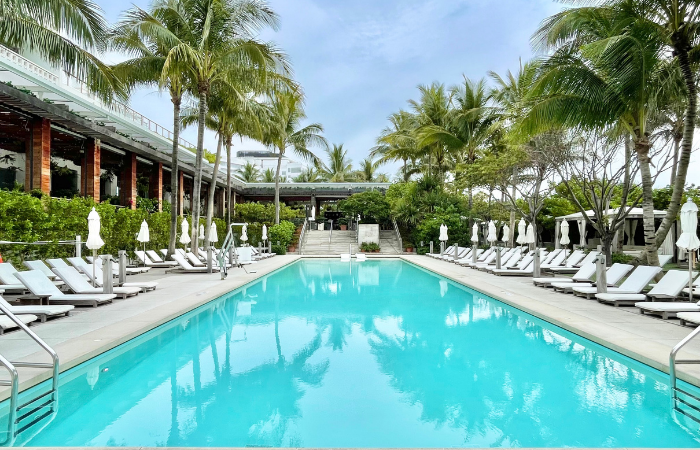 As I mentioned above, location plays a huge role in this hotel’s appeal. Now…I’m going to level with you. It became pretty obvious to me about 20 minutes after my arrival that I didn’t like Miami Beach. If I’m given a choice of places to stay in Florida (even in the Miami area), Miami Beach does not make it to the top of the list. But I’m going to try to put all of that aside and just review the hotel itself because I really did like the property. And if you’re a Miami Beach person, you’ll love it.

The Miami Beach EDITION sits at 30th street. The wild crazy part of South Beach (the part that I would avoid AT ALL COSTS) runs from 5th up to 15th. From 15th St to 23rd street is still South Beach, but it’s where you’ll start to find more resorts (instead of the small, cheap, party hotels) and slightly more order (gosh I sound like I’m 65 haha). Mid Beach technically starts around 23rd St so you’ve got even more buffer between the EDITION and the party scene (for the record…”party scene” is relative because really everywhere in Miami Beach is a party scene). 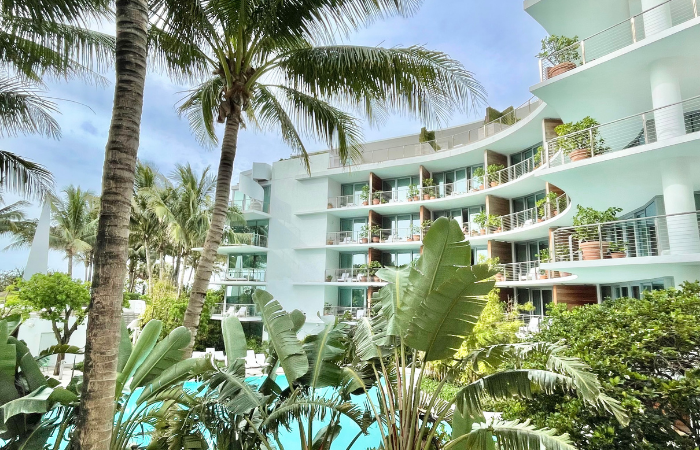 Even though Miami Beach is on the beach, it still feels very much like a city. And that means you get everything that comes along with city life. Traffic, construction, interesting characters about all hours of the day and night, noise, etc. In my opinion, even if you’re staying at the NICEST of resorts/hotels in Miami Beach, it feels a little jarring when you step outside the resort (if you’ve ever stayed in NYC you know what I mean).

Okay, so in terms of the EDITION specifically…it’s right across the pathway from the beach. There’s a Starbucks across the street. There’s a trolley stop right outside (the free trolley runs up and down Collins Blvd). There’s a lot around, but it’s not crazy town. It’s a GREAT location in Miami Beach. Don’t let me convince you otherwise ; )

Check In & The Room

This hotel makes a great first impression. The vibe is very light, airy, and modern. It has a luxe but comfortable feel (it doesn’t feel snooty or sterile). Walking in the lobby very much feels like a breath of fresh air. 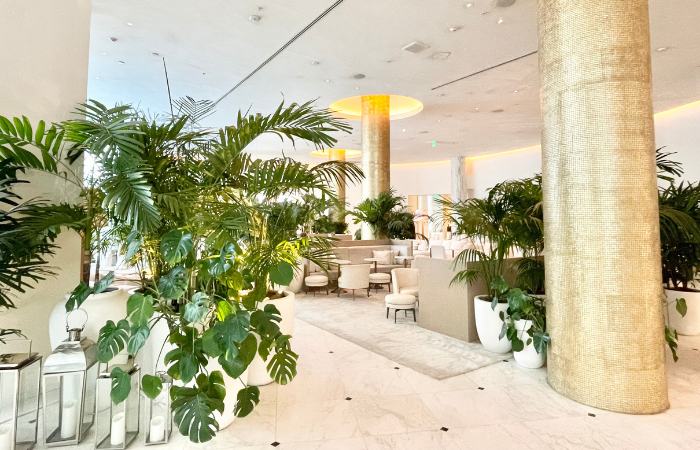 Check in was easy breezy and overall the service from the staff in the lobby and at the valet was top notch throughout the entire stay.

The rooms were clean and modern and had one of the best lounge chairs I’ve seen anywhere. Like seriously, where do I buy one? 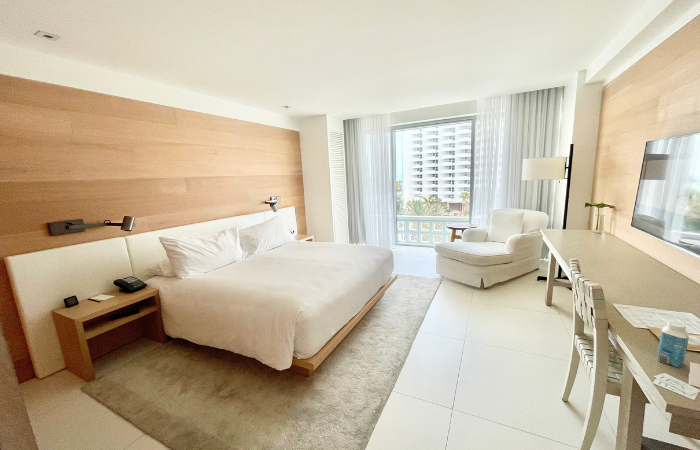 Here’s something to note…this didn’t bother me, but depending on your travel party situation…there’s not really a door to the whole bathroom. There’s a door to the toilet and a door to the shower, but when you step out of the shower the bathroom area is pretty open. There’s a sliding door that closes off part of it to the bedroom but the other end is wide open. Like I said, not a problem for me but something to be aware of. 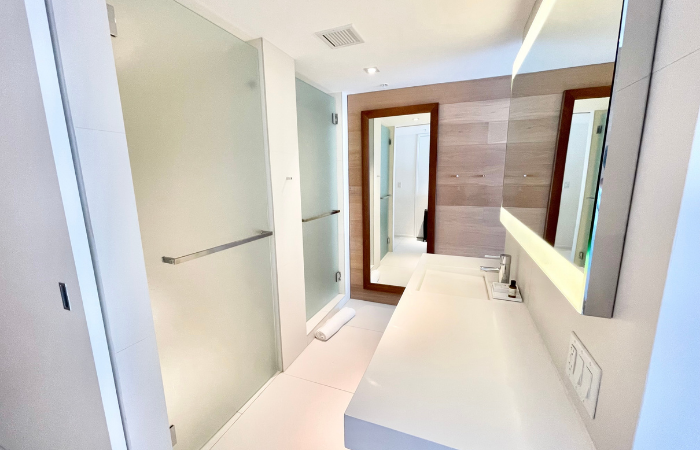 Also, most rooms in the main building/tower don’t have balconies. You’ll need to book one of the bungalows (a smaller tower) if you want one.

So here’s the thing…I’m 100% a gulf coast and panhandle beach snob so I’m never impressed by the beach on the Atlantic side. But a lot of people seem to like it…probably depends on what you’re used to. I will say there was a decent amount of seaweed in the water and along the beach the whole time we were there. It wasn’t just in front of the EDITION (it seemed to be the whole Mid Beach and South Beach area), but that was kind of a bummer. 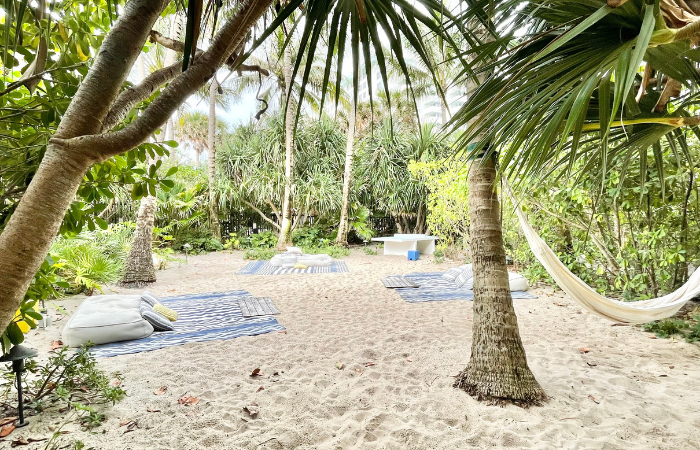 Chair and umbrella setup is included on the beach and that’s a huge perk since a lot of resorts charge extra fees. There was also a little snack shack out on the beach as well.

The pool area was pretty gorgeous. It was relatively quiet and usually had plenty of chairs (the pool attendants were good about monitoring which chairs were taken and which were available). I never saw a rule anywhere but it seemed like kids mostly stayed in the pool to the south (not sure if the pool attendants monitor that or if it just naturally happens). 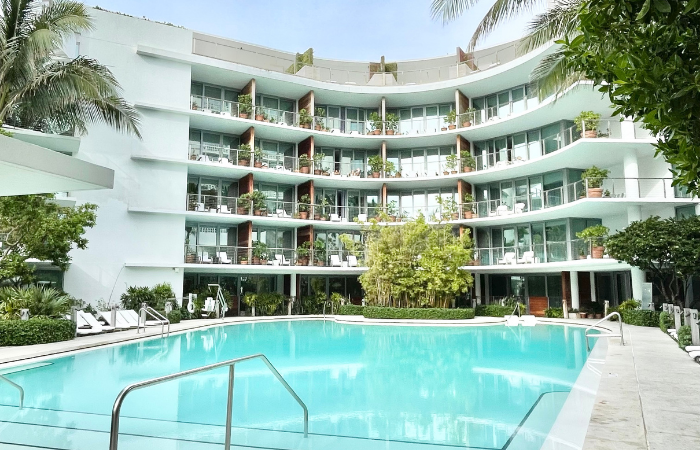 We had dinner one night at the Matador Room. Definitely ask to sit outside because it is one of the dreamiest spaces around. It’s tapas style which honestly always kind of throws me off (I like to own my entree haha), but it’s a really decent hotel restaurant. 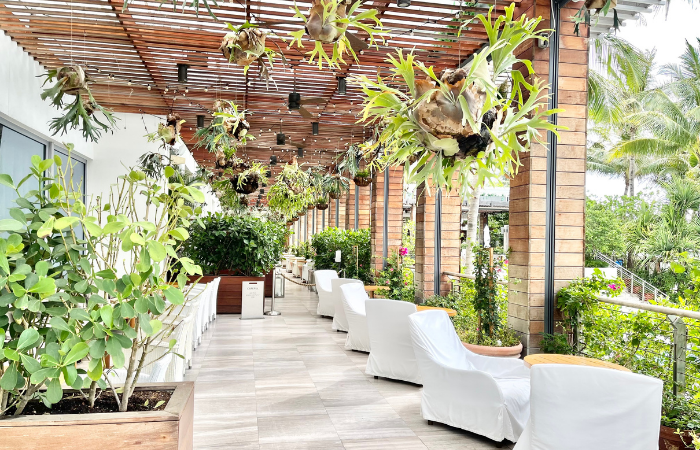 We did breakfast at The Market most mornings. It’s open for breakfast and until 6PM and it’s mostly a sit down restaurant. But we found out on the second day (when we saw people lined up at the counter) that you could order drinks, pastries, etc. to go. They don’t really tell you but it’s a good option if you’re in a hurry or just want something quick. Also…insider tip: coffee is free at the takeaway counter in The Market until 9AM. 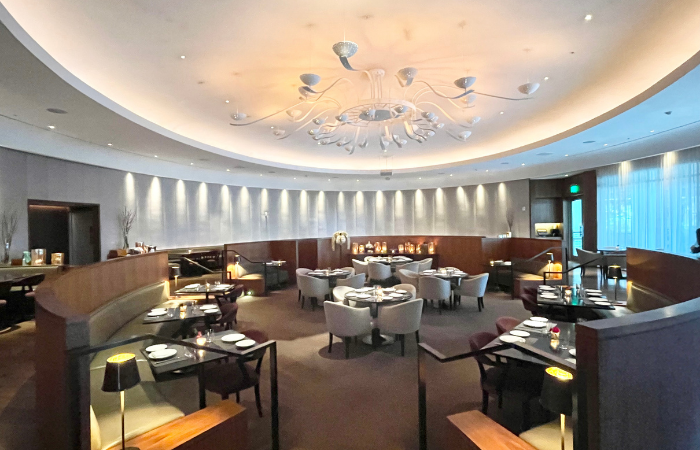 I had read about Basement Miami before we went, but it wasn’t open during our stay. It’s a nightclub, bowling alley, skating rink hybrid…kinda crazy but kinda fun…so if you’re looking for a little nightlife close to home definitely check the schedule and the hours (I think when it is open it’s only a nightclub on the weekends but the bowling and skating are open during the week?? Double check.). 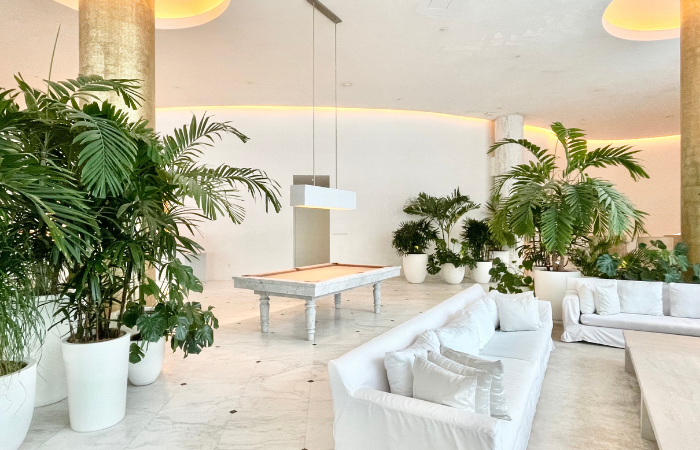 What I Loved about the Miami Beach EDITION

It has a great vibe. Trendy but lowkey and with a nice mix of people staying there (young people, couples, families). It’s not a 22 party hotel, but it’s not overly swimming with kids or older folks.

It’s part of the Marriott Bonvoy family so you can use points to book your stay. 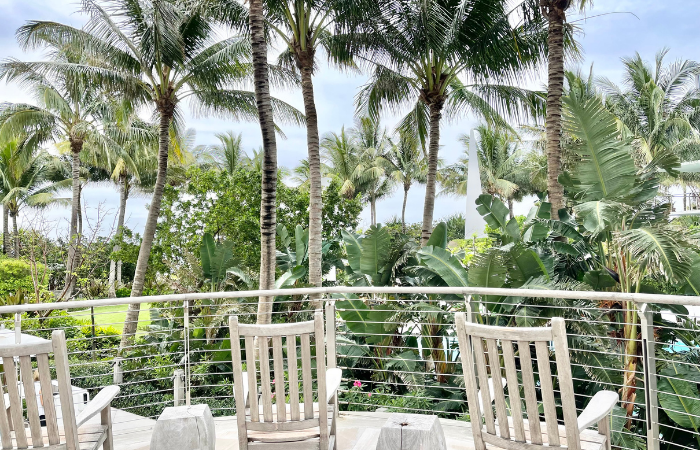 Really it’s just the downsides of Miami Beach in general and that’s probably just due to personal preferences of mine.

I would set your expectations before you go though because while the resort is lovely, it’s still very much a city hotel/resort. It’s pretty compact (compared to other Florida beach resort areas) and like I said earlier…when you walk out through the lobby onto the street it can feel a little jarring. 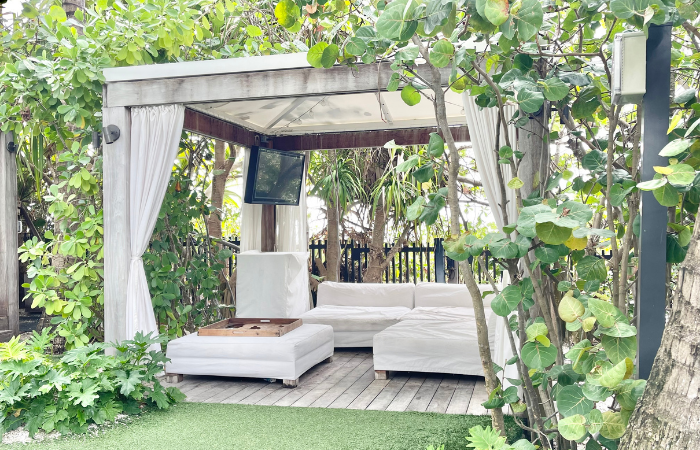 Rooms start around $450/night during certain times of the year. There’s a $49 per night resort fee (standard at most resorts these days) that covers things like wifi, bottled water in the room, beach chair and umbrella setup, exercise classes, etc. There’s also a fee for parking ($45/day).

You can book directly with Miami Beach EDITION here.