Growing up in Tulsa, OK with grandparents in Springfield, MO I’ve been seeing the barns advertising Meramec Caverns along I-44 for over 30 years now. So when I started plotting out my Route 66 trip through Missouri, seeing Meramec Caverns was high on my list.

Well, I’ll cut to the chase…it didn’t disappoint! And if you’re cruising through Missouri on Route 66 (or looking for something fun in the St Louis area, I highly recommend stopping for the cave tour. And I’d actually say if you only have time for one roadside attraction/diversion in Missouri that you should probably make it Meramec Caverns. 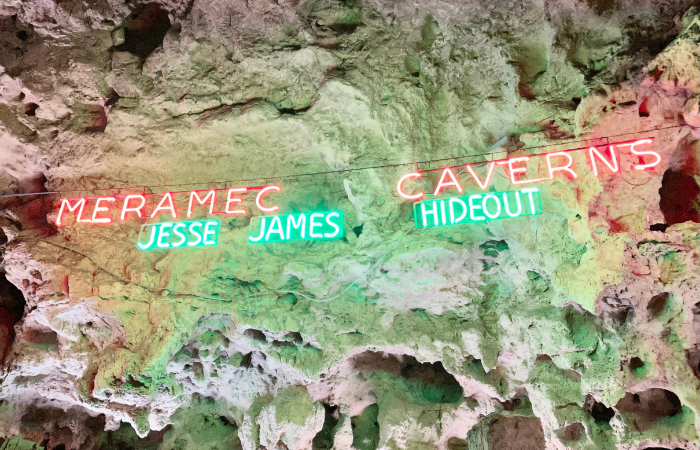 I’ll mainly let the pictures speak for themselves, but here are the details you need to know:

Tours of the cave take approximately 1 hour and 20 minutes and depart every 20-30 minutes. You don’t need reservations…you can just show up and they’ll put you on the next tour. Tickets cost $26/adult and $14/child (5-11), 5 and under are free. They give you the option to add gratuity for your guide onto your credit card when you purchase your tickets which is a nice option if you don’t have cash.

You can’t take strollers or wheelchairs, but it’s all paved and mostly a flat, leisurely paced walk until you get to the end and there’s a couple of staircases to get up to one of the most impressive rooms. But there is an option to skip that part and wait at the bottom if it’s too much. 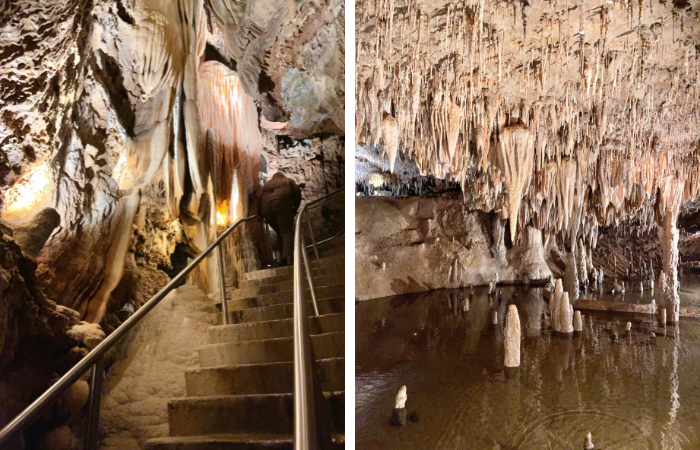 It is pretty chilly in the cave. It’s around sixty degrees but it’s 100% humidity so I think it felt colder. There’s also an upper chamber and a lower chamber and it was definitely colder in the lower. I had on jeans, boots, and a light sweatshirt and I went back for my coat after I bought the tickets, but I’m a pretty big baby when it comes to cold. Most people in our tour just had light jackets or sweatshirts and some were even wearing shorts. But they do sell a lot of jackets in the gift shop so that makes me think that a lot of people end up buying them there. 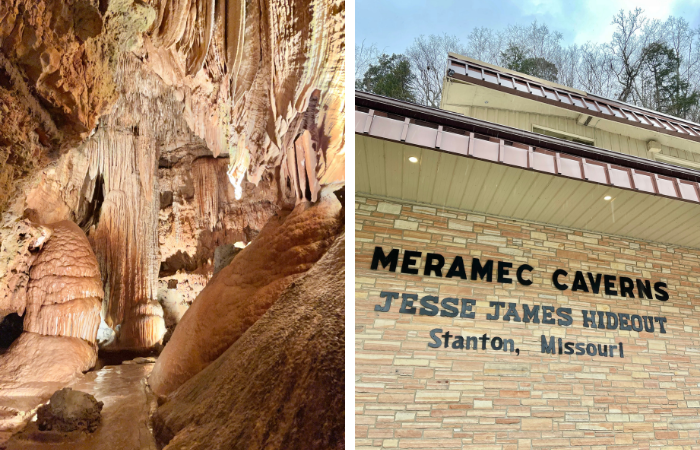 Highlights of the Cave Tour

The guides are really great and keep the tour moving quickly and tell a mix of historical and scientific facts. Besides being the largest commercial cave in Missouri, Meramec Caverns is famous for being one of Jesse James’ hideouts. So you’ll hear plenty about that. 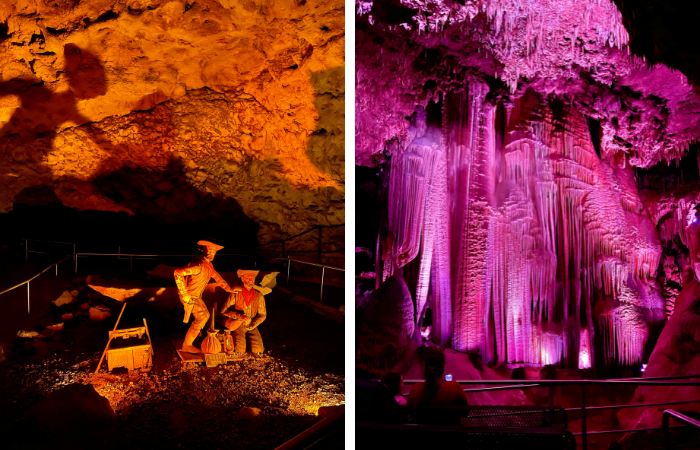 The Wine Table is the most unique formation in the cave and I’m pretty sure the only other known one in the world is in Italy and it’s underwater. Its legs formed from the bottom up and it looks more like a creature than a table. Unfortunately, back when the cave still hosted proms, a few mischievous high school students snuck into the room where the wine table is and stood on top of it and broke its neck. 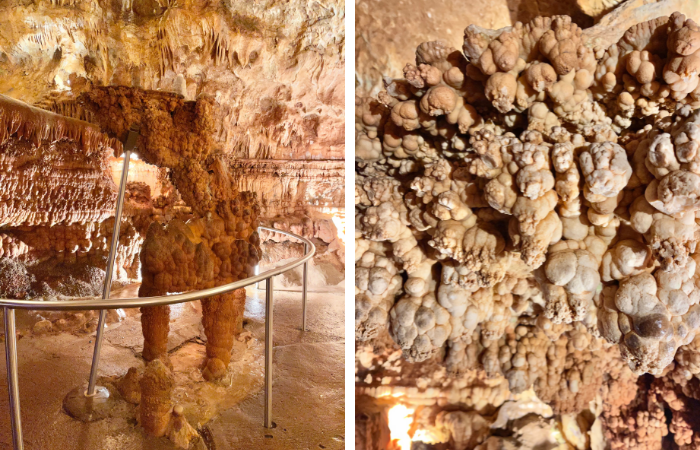 You can thank them for the extremely strict laws about touching or breaking any cave formations in the state of Missouri. They tried to reattach the formation, but it broke at its weakest point so they still use the metal support. 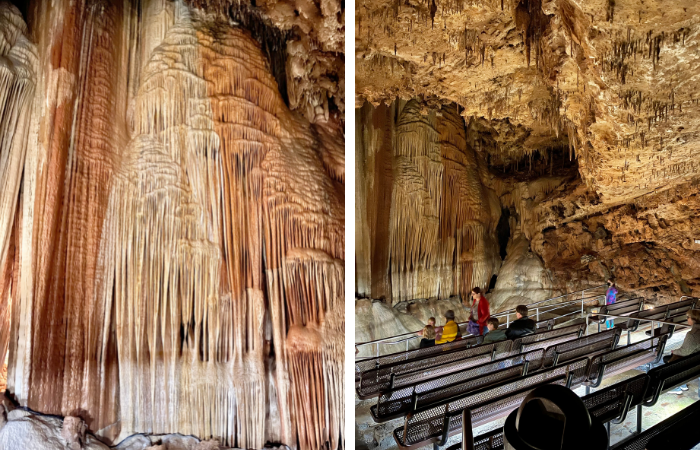 The big finale is the “Stage Curtain” theater show. They’ve actually built a small theater into one of the biggest formations which does look an awful lot like a curtain. Once everyone is seated there’s a light show (and some video) choreographed to God Bless America.

Is being in the cave scary or claustrophobic?

Not going to lie…I was a little apprehensive before the tour. I don’t really like caves and have low key anxiety in certain situations so I was expecting it to bother me but it really didn’t at all. All of the rooms are a decent size (you’re never in any super huge caverns though) and it didn’t feel claustrophobic at all. Everything is well lit and pathways are large. You’ll never have to squeeze through any tight spaces. Apart from knowing you’re underground, I didn’t find it too scary. 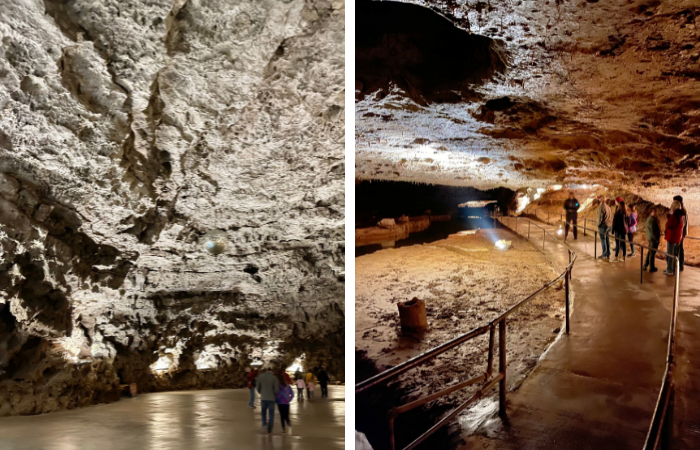 There are supposedly bats in the cave system, but we never saw any and since they’re nocturnal and it’s a very large cave it’s pretty rare to see them. Plus they’re the small, cute kind and pose no actual danger anyways.

The only part that psyched me out just a teeny tiny bit was the part where they turn off the lights. I think it happened when we were back in the Jungle Room. It doesn’t happen suddenly (the guide gives plenty of warning), but the guide explains about total cave darkness and then when everyone is standing still and holding onto a railing they turn the lights off for maybe 30 seconds or so. And it is DARK. You can’t see your hand in front of your face! But like our guide said, if it’s scary, you can close your eyes ; )

Overall, it’s a very family friendly tour and mobile older people will be good too. 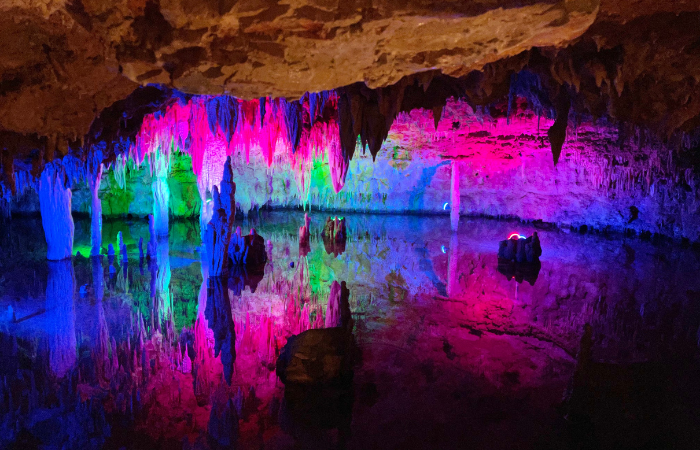 Other Things to See Nearby

Onsite at Meramec Caverns there’s a small motel if you decide you want to spend more time. The Meramec River runs through and it’s beautiful and they have all of your typical river activities (kayaking, float trips, etc.). There’s also a zipline. 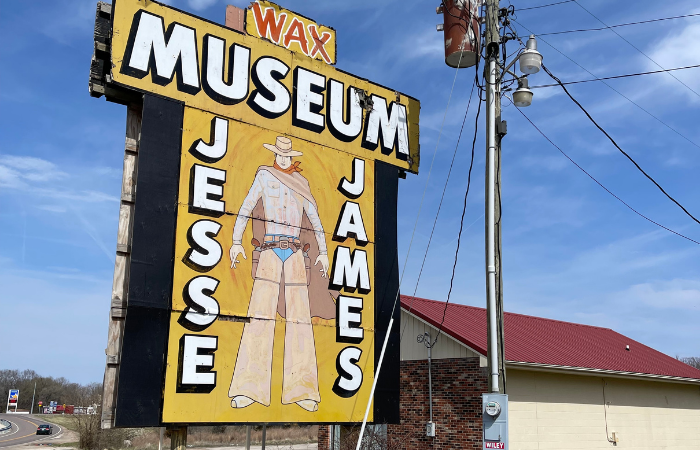 Back on Route 66 you’ll find the Jesse James Wax Museum. Since the caverns were a famous hideout of Jesse James, it’s only natural that his legacy has been immortalized in…wax. And they have theories, people! Including one that James didn’t die in a shootout in 1882 but instead lived under an alias until 1951. The museum is open every day in the summer, closed during the winter and open only on weekends during the spring and fall so call ahead to make sure they’re open during your trip. 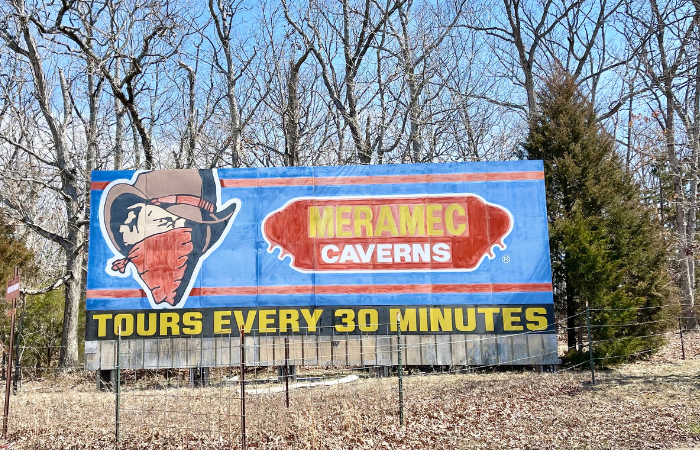 Keep an eye out for old barns dotting Route 66 (and I-44) that advertise Meramec Caverns. It’s been one of the cavern’s most successful marketing strategies since opening for commercial tours in the 1940s.